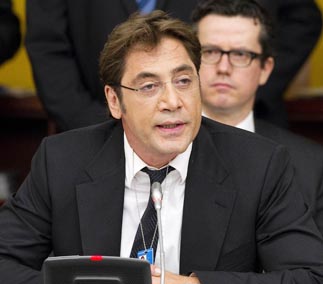 LOS ANGELES - He’s known as a genuinely nice guy in Hollywood, but Oscar-winning Spanish actor Javier Bardem transforms into a villain for the upcoming James Bond film, due in theaters next year.

Bardem appeared for an interview on ABC News program “Nightline” and confirmed what had been rumored for months when he was asked by journalist Christiane Amanpour about “the next villain you are going to play in James Bond.”

“I’m very excited because my parents took me to watch the movies, and I saw all of them so to play that is going to be fun,” Bardem said. “They chose me to play this man, but I cannot give you many details.”

Bardem, who is married to Spanish actress Penelope Cruz, is pretty good at being bad. The last time he portrayed a villain was in the dark drama “No Country for Old Men,” and the role of a maniacal killer earned him an Oscar for best supporting actor.

The upcoming thriller about the British secret agent 007, being called “Bond 23” for now, is expected to be released in November 2012.