The Islands of the Maldives. / The Grand Canyon in the United States


The contenders vying for the designation of New7Wonders of the World, including Jeju Island, are all intriguing enough to make a traveler eager to hit the road, and that seems to be one of the principal benefits of the competition, which will conclude with an announcement of the winners on Nov. 11.

The seven winners of the previous competition by the Swiss-based New7Wonders Foundation, which is dedicated to conserving and promoting world heritage sites, saw tourism jump by as much as 75 percent, according to the Jeju Tourism Organization.

But there is more to it than that, says Chung Un-chan, the head of the National Committee for Jeju New7Wonders of Nature.

“Of course it would meaningful to be one of the winners, but this competition has become a kind of guideline for the global population,” Chung said. “On top of that, just looking at all these sites gives you a sense of relaxation, as you picture yourself there.

“As foundation director Jean Paul said when I met him, that is one of the reasons why the foundation organized the competition. He said it is exciting that people all over the world are gathering to talk about a project they proposed,” he said.


The 28 contenders for the new designation are spread all across the globe and include such renowned destinations as the Amazon Rainforest in South America, Kilimanjaro in Tanzania, Iguazu Falls in Argentina and Brazil and Halong Bay in Vietnam. Among the lesser known sites are the Jeita Grotto in Lebanon, the Cliffs of Moher in Ireland and El Yunque in Puerto Rico.

But even these locales are attracting attention through features on the foundation’s Web site, www.new7wonders.com, which offers detailed information about each contender with a map showing where they are located.

In particular, the 27-minute film “El Yunque: Journey into a Tropical Rainforest” produced by GeoAmbiente del Caribe, brought attention to the Puerto Rican site when it won in the Health Science and Environment category at the 34th Suncoast Emmy Awards in Florida last December.

“I wouldn’t have known about El Yunque or the film if I hadn’t visited the Web site,” said Park Yong-jun, 19, who was visiting Jeju Island last month and agreed to comment about the competition. “I’m going to watch it before I move to America, with the hope that I get a chance to travel there someday.” 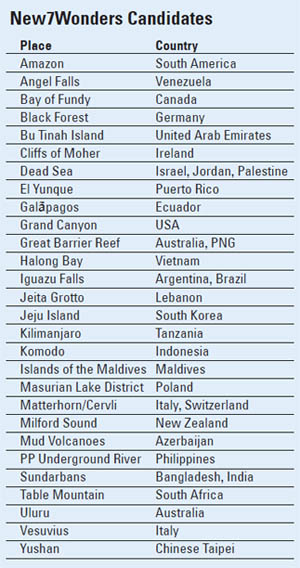 The Web site does not release regular data on voting trends. Instead, this data is published every second week of the month. That has caused concern among some voters.

“It’s understandable that they are not showing the results in order to prevent people from getting too crazy about the rankings,” said Kim Yun-ji, a 24-year-old student who was visiting Jeju Island last month. “But it would interest me more if some of the places I don’t know were ranked higher than the ones I already do know.”

The Amazon Rainforest, Iguazu Falls, Halong Bay and the Galapagos Islands are known to be garnering a steady stream of votes, according to a source related to the efforts to promote Jeju who asked not to be named. He also said that Jeju is currently ranked between 6th and 8th place.

“We can’t expect people to find Jeju by themselves,” said Yang Young-geun, CEO of the Jeju Tourism Organization. “Places that are already well-known have become famous because people who have been there have helped spread the word. So in addition to promoting this competition, we should also focus on constructing more tourism infrastructure, including building more hotels, resort areas and entertainment facilities, so that visitors to Jeju can also help spread the word.”