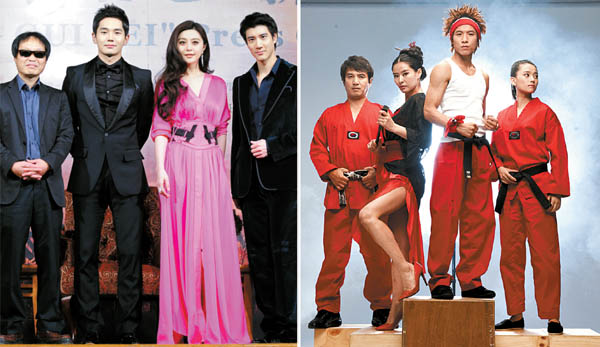 
BUSAN - Bustling with thousands of press, cinephiles and film aficionados, the port city of Busan turned into a place promoting the latest collaborative film projects of many Asian production companies during the 16th Busan International Film Festival during the past week.

First on the list was “Yang Gui Fei,” a joint production including Korea, China and Japan. Produced by the state-run China Film Group Corporation, Korean filmmaker Kwak Jae-yong, famous for his 2001 hit “My Sassy Girl,” is at the helm of the 18-billion-won ($1.5 million) film.

Kwak, who built a wide fan base in China with “My Sassy Girl,” has now become the first Korean filmmaker to direct a blockbuster Chinese period film.

“The story of ‘Yang Gui Fei’ and the history of the Tang Dynasty are shared by many Asian countries. Its universal charm made me direct this film,” Kwak told reporters last week during a prescreening event of the film in Busan.

Kwak wrote the screenplay over the past year. Shooting will begin next month in China. “Since there are not many documents about her, I had to fill a void with my imagination to create the legendary Chinese beauty. I tried to emphasize the humane side of her,” Kwak added.

Another blockbuster joint production from Korea, China and Japan is “My Way.”

Directed by Korean filmmaker Kang Je-kyu, who is known for hits such as “Shiri” (1998) and “Taegukgi: The Brotherhood of War” (2004), the war film features actors from three different countries. Korean actor Jang Dong-gun, Japanese actor Joe Odagiri and Chinese actress Fan Bingbing appear in the film, based on a true story that follows the tumultuous life of a Korean man who is conscripted into Japan’s Kwantung Army and is forced to fight for three countries - Japan, China and Germany - during World War II.

As a strategy to reach common ground between the three countries, three actors were carefully chosen. Both Jang and Odagiri enjoy huge stardom not only in their respective countries, but in many Asian countries. Fan Bingbing, a top Chinese actress, should attract Chinese fans to theaters.

The film will be released in Korea in December and next January both in China and Japan.

According to local film industry experts, collaborations between Korean and Chinese filmmakers are increasing.

Many Korean filmmakers are working on Chinese films. Director Hur Jin-ho is directing a remake of the French classic “Dangerous Liaisons” with Chinese and Singaporean production companies. Chinese actresses Zhang Ziyi and Cecilia Cheung will appear in the film. Another Korean filmmaker Ahn Byung-ki, who produced the recent hit “Sunny” which attracted about 7 million viewers in Korea, is working on a Chinese horror film.

A new attempt at collaboration was revealed during BIFF. Martial arts film “The Kick” is a joint production between Korea and Thailand. Directed by Thai director Prachya Pinkaew, famous for his 2003 hit “Ong-Bak, Muay Thai Warrior,” the film was invested in by a Korean production company but shot in Thailand with a Thai director and crew. Korean actor Cho Jae-hyun and Yeh Ji-won pair up as a couple who runs a taekwondo gym in Bangkok. The Korean family happens to obtain a stolen treasure of the Thai royal family and runs into a string of misfortunes.

“I was excited with an offer from a Korean production company of making a martial arts film themed with taekwondo but with a different style that you can find from Ong-Bak type of films,” Pinkaew told the JoongAng Ilbo.