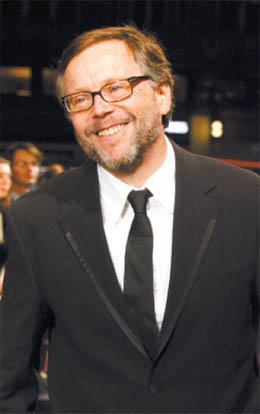 It was a fittingly globe-circling beginning to a cinema showcase that includes more than 300 features and shorts from 55 countries.

A bearded Jude Law, who appears along with Welsh acting legend Anthony Hopkins, Rachel Weisz and actors from Russia, Slovakia, Germany and beyond, posed for fans on the red carpet before the premiere of the film, directed by Fernando Meirelles and based on Arthur Schnitzler’s century-old play “La Ronde.”

Law praised Meirelles, best known for “City of God,” “who has woven this wonderful international ensemble together.”

Meirelles said he was shocked to be asked to open the festival for a second time - diplomatic thriller “The Constant Gardener” was the first-night film in 2005 - because “usually festivals open with big, bombastic films.”

“This is a very intimate film, a delicacy,” he said.

Like many delicacies, it is not to everyone’s taste. The film has so far had decidedly mixed reviews, with some praising its quiet complexity but others finding the interlinked vignettes glib.

The two-week festival in London promises something for lovers of cinema and celebrity-watchers alike - including two star turns from George Clooney. He directed and stars in political thriller “The Ides of March” and plays a detached father thrust into a caring role in Alexander Payne’s “The Descendants.”

Founded in 1957 to show the best of the year’s world cinema to a British audience, the festival has in the past few years tried to carve out a place on the international festival calendar with bigger pictures and more glittering stars.

While most of the films have already made their debuts at Sundance, Cannes, Toronto or Venice, there are 13 world premieres in the lineup, most of them new British features.

Highlights include “The Kid With a Bike,” a drama from Belgium’s Dardenne brothers; Nanni Moretti’s Vatican satire “We Have a Pope”; Sundance hit “Martha Marcy May Marlene,” starring Elizabeth Olsen as a traumatized cult runaway; and French director Michael Hazanavicius’ delightful silent-film homage “The Artist.”

Controversy may be provided by “W.E.” - Madonna’s take on the romance between King Edward VIII and American divorcee Wallis Simpson, critically derided at its Venice debut - and Roland Emmerich’s Shakespeare-bashing “Anonymous,” which stars Rhys Ifans as the putative true author of the Bard’s plays.

On Oct. 26, the festival will hand out a best-picture prize, from a shortlist that includes “The Artist, “The Descendants,” Aleksandr Sokurov’s Venice Film festival winner “Faust” and Lynne Ramsay’s high school massacre drama “We Need to Talk About Kevin.”