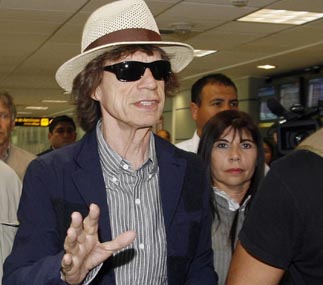 LIMA - Rock legend Mick Jagger on Wednesday was named an honorary ambassador for tourism in the Madre de Dios region of the Amazon rainforest, tasked with helping promote and preserve the Peruvian region’s fragile ecosystem.

“You are our ally. Your presence is a great support in our fight to protect our ecology, to the effort to draw world attention to the Madre de Dios area,” said the regional tourism director Juan Carlos Arzola.

The remote region of Madre de Dios (“mother of God” in Spanish) borders Brazil, Bolivia and the southeastern Peruvian regions of Puno, Cusco and Ucayali.

The Rolling Stones frontman, 68, is accompanied on his Peruvian travels by his girlfriend, the former model L’Wren Scott, and their toddler son.

Jagger was also given various gifts by indigenous people of the region, including what they said was a “sacred mantle” used only by the greatest of chiefs as well as bows, arrows, necklaces and a feather headdress.

Jagger was originally cast to play a bit role in the 1982 movie “Fitzcarraldo,” which is set in Peru’s Amazon rainforest, but he was forced to pull out of the project due to scheduling conflicts.

Over the weekend, Jagger met with Peru’s president Ollanta Humala and First Lady Nadine Heredia in the capital city Lima.

He was planning to travel later this week to Cusco to view the ancient Incan ruins at Machu Picchu.