Working together to help the homeless

Working together to help the homeless 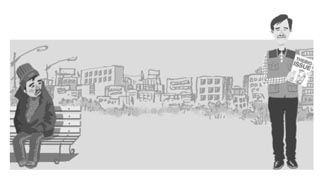 Yesterday morning on my way to work, I passed the man I’ll call the “bench man.” He was sitting on the same bench near Namdaemun where he always sits, and as usual, he was all by himself. He always wears the same black pants, black sneakers and grey jacket - all of which seem to get darker and shabbier by the day. On my way home, I saw him still sitting there. The seats next to him are always empty because the people waiting for the bus avoid sitting next to him. He has a mustache, smokes and has a habit of shaking his left leg. He hasn’t harmed anyone, at least in the year since I started noticing him, except that he often startles pedestrians by laughing or making incomprehensible sounds.

Up the road, in front of the Donghwa Duty Free Shop in Gwanghwamun, there is a homeless man who sells the Korean edition of The Big Issue. The magazine was founded in the United Kingdom in July 2010 as a social enterprise to help homeless individuals find ways to make a living. To sell the magazine, vendors must agree to a set of rules: no drinking, no interfering with pedestrian traffic, wear a red vest and sell the magazine at a designated location. Vendors must also smile and hold their heads up with dignity.

The Big Issue relies on the contributions, interviews and photos of those willing to help the homeless. Each magazine is sold for 3,000 won ($2.58), and 1,600 won goes to the vendor. A homeless, jobless individual may obtain 10 copies of the magazine after going through a training program. After selling all 10 copies, an individual makes 16,000 won, which can be used as seed money to continue selling the magazines. If the business goes well, the vendor may be able to make a legitimate income, find a home and rejoin society. Generally, the first two weeks of sales determine whether a vendor can continue to sell the magazines or is likely to return to homelessness.

Between the “bench man” at Namdaemun and the Big Issue vendor at Gwanghwamun, there is another man near Deoksu Palace. I’ll call him the “hammer man,” but his name is Jo Gyu-hyeon, 51, and he lost his right arm when he was young. He uses his other arm to carve names and phrases on wooden blocks to make a living. He has been carving wood for 17 years now.

All three men are part of a social minority, but their situations are about as different as their individual needs. Together, we need to try to understand each person so that we can help meet their needs.