Lee gets briefed at Pentagon in show of closeness

Lee gets briefed at Pentagon in show of closeness 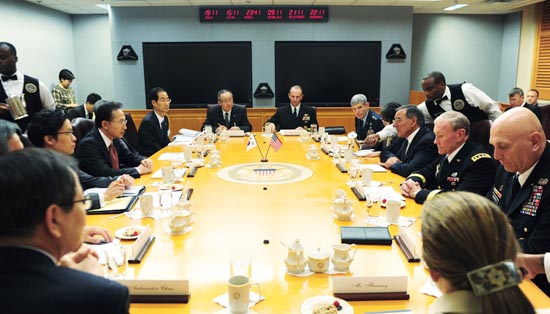 Top U.S. military officials give a briefing on North Korea and other security issues to South Korean President Lee Myung-bak who was invited to the Pentagon on Wednesday. [YONHAP]


WASHINGTON - President Lee Myung-bak paid an unprecedented visit to the Pentagon on Wednesday and received a briefing from top American military officials on North Korea and other security issues, the Blue House said.

Lee is the first South Korean president to visit the headquarters of the U.S. Department of Defense.

The unscheduled event was organized after the United States invited Lee, saying it wanted to brief him on Washington’s position on the security situation on the Korean Peninsula, the presidential office said.

“The U.S. government’s invitation of President Lee to the Pentagon is an act of showing respect to the head of state of the ally South Korea and reaffirming the firm U.S. commitment to security on the Korean Peninsula,” a Blue House official said.

Participants in the meeting included Secretary of Defense Leon Panetta, Joint Chiefs of Staff Chairman Gen. Martin Dempsey and other U.S. military commanders, such as the chiefs of the Army, Navy and Air Force.

The briefing was held in the Pentagon’s secure “tank room,” making Lee the first foreign leader in recent history to get a security briefing in the room, the Blue House said. During the briefing, General Dempsey reported to Lee that the U.S. military was ready for any kind of security situation on the Korean Peninsula, and Lee offered his praise, according to Kim Tae-hyo, a key presidential security aide.

The U.S. Department of Defense said the leaders “discussed a range of security-related alliance issues, including how best to work together to improve alliance capabilities and deterrence measures.”

U.S. officials “provided President Lee with an updated North Korea threat assessment,” according to Capt. John Kirby, deputy assistant secretary of defense. “Today’s briefing represents the first time in recent history that a foreign head of state has been briefed by the service chiefs in the tank,” he said.

“Secretary Panetta hosted Defense Minister Kim [Kwan-jin] in the Secretary’s office for follow-up discussions about peninsular security, to include potential agenda items for the upcoming Security Consultative Meeting to be held in Seoul Oct. 28,” he added. “Secretary Panetta affirmed that the U.S.-ROK alliance is a cornerstone of stability in Northeast Asia and has never been stronger.”

Lee arrived in Washington on Tuesday for a five-day state visit that includes talks with U.S. President Barack Obama and an address to a joint session of Congress.

Meanwhile, Kim Yoon-ok, the Korean first lady, was scheduled to visit Annandale High School yesterday with Michelle Obama, the U.S. first lady, the AP reported. The school is located in northern Virginia, home to a large population of Korean-Americans.

The official state dinner, a swanky black-tie affair, is scheduled for Thursday night, and some details have emerged, including the night’s entertainment. Among the scheduled entertainment will be the Ahn Trio, three Korean-American sisters who play the violin, piano and cello.