If his opponent, former Representative Na Kyung-won, appears too prim and proper, Park Won-soon may just as well embody the opposite.

Born in 1956 in Changnyeong, South Gyeongsang, Park looks relatively dowdy compared to his photogenic opponent. And while Na’s career has traced a rather establishment arc, Park’s has been anything but: lawyer, human rights activist, editorial writer, author, professor and founder of multiple civic groups.

“Politician” hasn’t been part of his curriculum vitae, but that may soon change as Park seeks to become the next mayor of Seoul as an independent liberal, promising a new dawn for the city and an end to the era of conventional party politics.

His favorite English saying, Park has said, is “There is another way,” and in many ways, his life has mirrored that motto.

The sixth of the seven children in a family of farmers, Park graduated from the prestigious Kyunggi High School in 1974 before entering Seoul National University. But he was expelled and put in prison after just three months for participating in a student protest against the Park Chung Hee regime.

His four months in jail was a life changing moment, Park has said, talking with other inmates and thinking about the conditions that caused them to commit their crimes.

He entered Dankook University in 1976 as a history major and passed the bar in 1980. He then became a prosecutor in Daegu in 1982 but left after a year because of his discomfort with capital punishment. 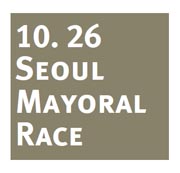 Park switched gears to become a human rights lawyer, taking major cases in defense of activists and victims of sexual harassment. He was the defense attorney for the student activists who were accused of committing arson on the Busan American Cultural Service building.

The death of his mentor, lawyer Cho Young-rae, in 1990 was another turning point in Park’s life - and the catalyst behind his rise as one of the nation’s most prominent civic activists.

After studying at Harvard University at the advice of his late mentor, Park returned to Korea and took up the mantle of the weak and disenfranchised.

In 1995, Park co-founded the People’s Solidarity of Participatory Democracy, one of the first and most influential nongovernmental organizations in the country. BusinessWeek magazine named him one of Asia’s 50 leaders at the forefront of change in 2000.

One of the organization’s key initiatives was launched in 1998, which attempted to strengthen the rights of small shareholders to improve management transparency and monitor inappropriate ownership structures of the country’s conglomerates.

Another project in 2000 of blacklisting legislative candidates who the group deemed to be unfit would prove to be controversial. Park’s campaign was effective, with 59 of the 86 politicians on the blacklist losing. It was particularly effective in the capital region, with 19 of the 20 blacklisted candidates going down in defeat.

The project was later ruled illegal by the Supreme Court, with the Constitutional Court upholding existing election laws that banned blacklisting in 2001, stating that Park’s initiative was unconstitutional.

In 2002, Park took on another venture, launching a nonprofit charity, the Beautiful Foundation and the Beautiful Store, to promote the culture of “sharing.” In 2005, Park lectured at Stanford University as a visiting professor on Korea’s civic movements.

In 2006, he established the Hope Institute, a think tank of ordinary citizens that “researches and puts theories into practice regarding our society’s large and small agenda items,” according to the institute’s introduction.

But despite all of his accomplishments as a civic activist, his integrity has also come under fire since he announced his candidacy for City Hall.

Both his liberal rivals in the primary as well as conservatives have pointed out suspicious patterns in his organizations’ finances, in which the People’s Solidarity of Participatory Democracy criticizes conglomerates while his Beautiful Store receives massive donations from them.

“You were holding a whip in one hand while receiving money with the other,” Democratic Party candidate Park Young-sun said about Park’s nonprofit funds during the primary. Conservatives have also alleged that Park used money from conglomerates to finance other leftist civic groups.

Park, however, said that contributions were spent transparently and that the records had been made public on the foundation’s Web site.

Park’s views on national security have also come under scrutiny and criticism, with conservatives calling him “pro-Pyongyang.” He has been criticized for keeping silent on human rights abuse in North Korea while opposing the National Security Law.

During the Lee Myung-bak administration, Park also faced off against the National Intelligence Service in a defamation suit after he accused the agency for spying on activists. The NIS has sued Park for libel, but the Seoul Central District Court has cleared him. The suit is currently pending in court.