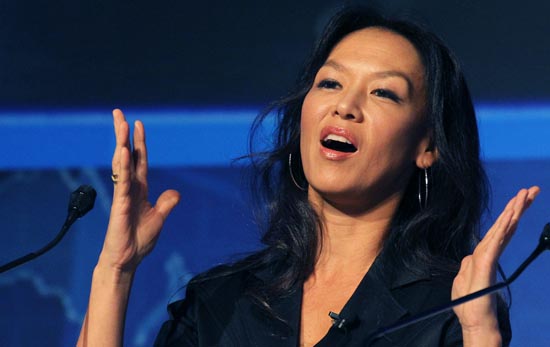 Amy Chua, author of “Battle Hymn of the Tiger Mother” and professor at Yale Law School, delivers a speech at the World Knowledge Forum on Thursday at the Walkerhill Hotel in northeastern Seoul. Provided by Maeil Business Newspaper


For the majority of moms in Korea, having their children spend two hours practicing violin without a break, day after day, despite the protestations of the child, may be considered nothing really special.

But when Amy Chua, professor at Yale Law School, wrote of similar parenting practices in her recent best seller “Battle Hymn of the Tiger Mother,” she received 200 emails every hour from angry readers.

When Chua was invited on a U.S. morning TV show after the book was published in January, she was criticized for “torturing” her daughter and even asked if she was a monster.

The Chinese-American academic, raising two teenage daughters - Sophia and Lulu - with her fellow academic, Jewish American husband, says much of the fierce reaction to her memoir was based on misunderstanding.

The memoir was about her own search for the right balance on how to combine the best of Eastern and Western parenting styles, she said in a speech at the World Knowledge Forum during her first visit to Seoul on Thursday.

One of four daughters raised under highly traditional and strict Chinese parents who immigrated to the United States in the 1960s to be graduate students at MIT and who did “everything for the future of their children,” Chua said she wanted to raise her daughters the same way.

However, she wrote the book in a moment of total crisis, Chua confessed. When her second daughter Lulu turned 13, she started rebelling against her strict parenting.

“It was a very difficult time of my life .?.?. She seemed to turn against everything I stood for.”

She continued, “The climax of the book is a scene in Red Square in Moscow. I and Lulu had a huge public argument. She said to me some of the most painful things - I hate you, violin, family, you make me feel bad about myself, you are a terrible, selfish person, everything you did for me was for yourself. That’s when a big change came. I let her make her choice. I didn’t give in entirely. Two years ago it was a hard year. After I gave her more freedom she came back to me.”

Yet she still doesn’t believe if you just say to your kids “do whatever you want” then they will grow up to be happy.

“As parents it’s our job to prepare them for the future. And there’s also something, I think Westerners often miss, very joyful and fulfilling about doing anything extremely well - whether it’s photography, piano, cooking or anything.”

Mentioning her own connection with Korea - her daughter’s violin teacher and her own teaching assistant at Yale are both Koreans - she praised the excellence of Korean students at her school and expressed her deepest admiration for Korean parents.

At the same time, however, emphasizing hard work and long hours is not enough, she noted. Many of her Koreans students are amazing on paper but so many of them come to her and say they didn’t know why they were studying something like law and that they wanted to navigate totally different professions like fashion designing.

“Once they are mature they are supposed to know what their passions are. But they say their parents didn’t care about their happiness. Many Asian parents who raised their children like me say it didn’t work out. I think that’s tragic.”

As solutions, she proposed that parents give kids something to look forward to: smaller things such as half a day off, a big party or afternoon shopping, to lift the pressure. Second, she proposed a dialogue with children, moving away from the old-fashioned hierarchy. Most importantly, she firmly believes kids learn by example.

“If the parents aren’t happy and laughing, it’s going to be hard for the kids to be happy.”