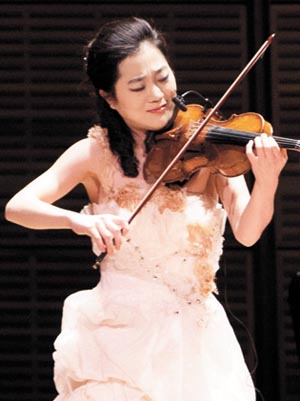 Park Ji-Hae, the first musician of Korean descent to perform during the opening of the season at Carnegie Hall, plays in New York on Monday. By Jung Kyung-min

NEW YORK - Korean-German violinist Park Ji-Hae made her debut at Carnegie Hall in New York on Monday, marking the first time that someone of Korean descent has participated in the opening of the storied music venue’s season.

The 26-year-old violinist performed with great fervor during her solo recital on Oct. 10, at Zankel Hall, a smaller recital hall, sometimes tapping her feet to the music, sometimes swaying her head. Propped under her chin was a 1735 Petrus Guarneri violin. The instrument, which has a fleur-de-lis inlay and an orange-brown varnish, is valued at around $4 million and was loaned to Park by the German government in 2003.

Watching the radiant violin prodigy, one would never guess that at one time she had battled depression and found solace in her music.

Park was catapulted to national fame earlier this year with her performance on the popular Korean variety program, “Star King.”

Park is known to perform a wide range of musical styles, ranging from children’s songs to trot, which has helped make the violin more accessible even to those who are not well-versed in classical music.

Born in 1985 in Mainz, Germany, Park has been called a violin prodigy since she was a child. When she was 14, she gained admission to a music conservatory in Mainz, bending the school’s rules because it only accepts students older than 16. She won first place in a German national youth music competition for two straight years in 2002 and 2003.

However, her early success soon became a double-edged sword. As the pressure to perform grew more intense, she fell into a bout of depression. Though she tried to endure this stress, she eventually came to Korea and began to consider abandoning music as a profession.

Park sought music that she enjoyed and started volunteering at hospitals and prisons. During this time, her depression began to subside. In abandoning her fixation with music, she was able to regain her love for it.

In her first performance at Carnegie Hall, Park started off the “Hope & Love Concert” with Saint-Saens’ “Danse Macabre,” famous here for being the music that figure-skating champion Kim Yu-na used for her gold medal winning short program at the World Championships in 2009. Park followed that with Mozart’s Violin Sonata No. 21, Pablo de Sarasate’s “Zigeunerweisen” (“Gypsy Airs”) and “When Mama Goes to Pick an Oyster,” a Korean children’s song, displaying a wide variety of genres in her repertoire.