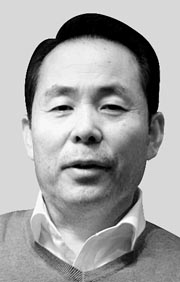 Professor Park Gi-suk, a South Korea-born Australian citizen, is the first South Korean to receive a Ph.D. from the Pyongyang-based Kim Il Sung University. He participated in the first International Academic Conference at Kim Il Sung University last month, which was not attended by any other South Korean. Residing in Australia, Park, 56, is the Director of the North Korean Language Research Institute in Australia. He emphasized the need to bridge the gap between the language of the South and North for the future generation of Korean speakers, in an exclusive interview with the JoongAng Ilbo on Tuesday.

It was as if North Korea was finally opening its eyes to “globalization,” Park remarked. Scholars from South Korea were also invited, however plans were thwarted during the review process because of strained North-South relations.

Park surmises that he was invited because he was a Ph.D. graduate of Kim Il Sung University and an Australian citizen.

Park is a native of Boeun, North Chungcheong province. After graduating with an M.A. in education from a university in South Korea in 1990, he went to study abroad in Australia, completing his doctorate in education in Melbourne.

During his residency in Australia he saw a North Korean newspaper displayed on the wall of the North Korean embassy and cultivated an interest in North Korean language, essentially the same language but with different nuances.

As an education major, Park feels the continued importance and relevance of Korean education for Koreans abroad.

Having a personal crisis when raising his family in Australia, he called his friend and his friend’s son answered the phone, “Dad’s not here. Who?”

The boy spoke in informal Korean used for your friends or someone younger than you.

Park stated, “Spending so much time abroad, he did not have good command of the Korean language.”

Park received yet another shock when his own son said, “Mom, the kimchi has grown old [neulgeosseoyo]” as opposed to “the kimchi has soured [sieosseoyo].”

“The North and South need to put in a combined effort for Korean language education for Koreans abroad and for foreigners,” Park stated, reflecting upon his experience both in Australia and North Korea.

He could have returned to South Korea after completing his studies in Australia, however, in 2004, Park visited Pyongyang and, attracted by the North Korean dialect, he matriculated at Kim Il Sung University, where he studied the similarities and differences in the language of the North and South. In 2007, he received a Ph.D in language, completing his doctorate dissertation on “Research on the Basis for the Unified Progress of the Korean Tongue.”

Park points out that the letter form and the way of typing on the Korean keyboard is different in the North. In the North, the top horizontal stroke of the Korean symbol equivalent to the “t” sound which in the South has three parallel horizontal strokes attached with a vertical line in the left, is separated from the lower half. His mentor advised him that if the format of the essay was not written in the North Korean style, then it wouldn’t be approved.

“I have a vivid memory of shaving off the attaching line between the top horizontal stroke with the lower strokes with a pencil-sharpening knife all night long before my 120-page dissertation was due.”