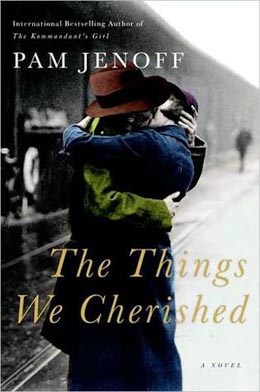 TOKYO - A diplomat and lawyer before fulfilling a long-held dream of writing novels, Pam Jenoff says that being a lawyer has helped her write better fiction - even though none of her books, up to now, has set foot in a courtroom. But her latest, “The Things We Cherished,” combines a look at Jewish history up to and during World War II with the trial of an elderly man accused of war crimes who maintains that proof of his innocence is in an elaborate clock last seen in Nazi Germany.

The mother of three children under three, Jenoff also teaches law and says that while she once wrote from 5 to 7 in the mornings before going to work, she now has trained herself to use every bit of free time she gets, writing in short bursts whenever she can. She spoke with Reuters about how law and her experiences in Poland as a diplomat informed her writing.

Q. What got you started on this book?

A. The idea for the book itself came from a clock that my husband gave me for our first wedding anniversary, known as an “anniversary clock.” It’s called that because it only needs to be wound once a year. It’s a beautiful antique clock, and as I looked at it, I started imagining where the clock had been and the history of the clock, and a fictitious history emerged for me - the clock’s about a hundred years old. So I envisioned it in different places through time throughout the 20th century, and it became a metaphor for the Jewish experience in 20th century Europe. Going back even before that, of course, my broader interest in the subject of the Holocaust and World War II comes from my time as a diplomat with the State Department in Krakow, Poland, working on Polish-Jewish relations and post-Holocaust issues.

What is it about World War II and Jewish-German relationships that fascinates you and fascinates us?

For me personally, I was in Poland for a few years ... and really immersed in issues that had arisen out of the Holocaust. I also became very personally close to the surviving Jewish community there, and I also came to know their stories. The period of time was very much vivid and alive for me. I think more broadly for people, it’s really about an incredibly difficult time where people were just really pushed outside their element and forced to take actions and choices that they otherwise would not have been. I think it’s just such a fertile period for talking about choice and consequence, and all those things. What would I have done in those circumstances? I think people tend to put themselves in those shoes.

What are the messages for us?

There are a few things. I really think it’s important to avoid painting people as black or white and using the broad brush strokes we tend to use in history, because things were a lot more gray and nuanced than that, especially in terms of people and their choices and individual responses, and I want people to take a look at that.

The other question the book raises is that the elderly man was a Nazi collaborator, and the question becomes, are we going to prosecute war crimes from 60-plus years ago? What value does that have? Should we be spending the resources on more modern day atrocities in the Sudan and elsewhere? Or, is this important because of its symbolism for the modern day atrocities? I don’t give readers one conclusion or another, I just want them to think about it.

How did being a diplomat and lawyer feed your writing?

I don’t write autobiographical material because I personally think that real life makes for a terrible plot, but it makes for a great setting. So all of the experiences I had abroad really go into the place, making the place come alive. I’m still writing about all these experiences from more than a decade ago. Now, being a lawyer is interesting. [The book] is actually my first book with a lawyer protagonist and so I wonder if the lawyer is starting to creep into my writing after all these years. But there’s a lot of synergies between legal writing and fiction writing. In fact, in my other life right now I’m an academic and teach law school, and I actually just got a grant because I’m writing about these synergies - how can these two be brought together? Why do so many lawyers want to be writers? Why do so many writers write about law?

I think that the help goes both ways. Being a novelist helps you to tell a compelling narrative and craft a story for your client. I think there are a ton of fiction writing techniques that novelists use that can be imported into legal writing to jump-start creativity and bring life to work.

The single biggest thing that being a lawyer brought to my fiction writing was the ability to revise my work. When you’re a writer, people don’t give you solutions, they give you problems. Your editor and your agent say there’s not enough tension in the third arc, and such. You have to take their feedback and incorporate it in a way that’s your own. That’s very much like being a lawyer, where somebody marks up your brief and you have to go back and redo it. One of the three biggest things that’s helped me as a novelist is the ability to revise, and I think that comes from the lawyer world.

The Things We Cherished