ANSAN, Gyeonggi –– Clad in taekwondo uniforms, a small group of foreign nationals was milling around outside a sports stadium in Ansan just after lunch on a recent afternoon earlier this month. Some were chatting while others stretched in preparation for their upcoming taekwondo exhibition at the International Unity Festival 2011.

The festival, held at Ansan Wa Stadium on Oct. 9, was just one of many recent events geared toward fostering understanding in a country that is still searching for ways to accept its growing foreign population.

The festival’s aim is to provide a place for Koreans and foreign nationals to mingle while promoting harmony among cultures.

In addition to the taekwondo exhibition, there was a mixed martial arts competition for ssiruem (wrestling) athletes and Mongolian wrestlers and a Korean song contest for a chance at 1.7 million won in prize money.

There was also a samulnori (percussion quartet) performance and a competition in sepaktakraw, a volleyball-style sport popular in Malaysia, Indonesia, Thailand and other southeastern Asian countries.

Along with the activities, there were booths offering food from Indonesia, the Philippines, Thailand and Nepal. At another booth, visitors could try on traditional garments such as Korean hanbok and Japanese yukata.

“About one third of the students in schools in Ansan are of foreign heritage,” said Kim Eun-kyung, who came to the event with her family. “I want my children to learn more about the cultures that their friends come from.”

Her two children were trying on the clothing and playing with a kadama, a Japanese toy with a wooden ball and a bowl connected by a string. Her older child was trying to get the ball into the bowl with his right hand. When asked what he does when spending time with children from multinational families, the boy looked perplexed. 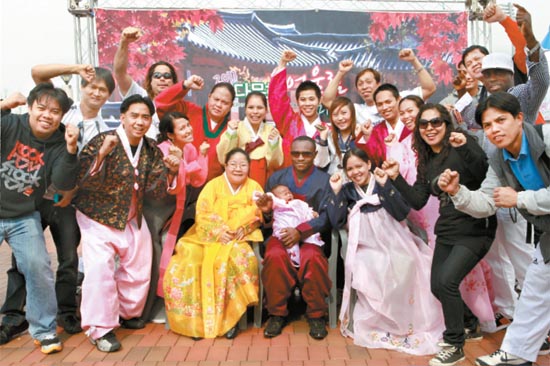 Festivalgoers pose at the International Unity Festival on Oct. 9. The annual festival aims to foster understanding of foreign nationals in a country still searching for ways to accept its growing foreign population. By Park Sang-moon


The city in which the festival was held, Ansan, offers a microcosm of Korea’s attempts to become a multicultural country. According to Statistics Korea, more than 1.1 million of Korea’s resident population is of foreign descent.

Located southwest of Seoul, Ansan is close to many industrial complexes that employ large numbers of foreign workers.

It was these workers who helped start the festival, which began as a football match in 2004. As the city’s foreign population grew, the sporting event expanded to include cultural events and became a festival in 2006.

To help the growing number of foreigners in Ansan acclimate to Korea, the city opened the Ansan Migrant Community Service Center in Wongok-dong in 2008.

Wongok-dong has the highest foreign population of any neighborhood in Ansan with 17,000, followed by Choji-dong with 8,000, according to statistics released by the center this month. The neighborhood is known informally as a “borderless village” and formally as the Ansan Multicultural Village Special Zone, a designation it was given in 2009.

“The taekwondo class is truly multicultural since people of 16 nationalities practice together,” said Son Heeyeon, a taekwondo instructor at the center. “With other sports, usually one nationality dominates — Chinese mostly play table tennis and Indonesians play badminton.”

Joven Sagala, a 31-year-old Vietnamese student who is now working toward a blue belt, said that taekwondo not only gives him and other foreigners a chance to mingle with each other, but is also a good outlet for stress.

“I have a lot of stress from working all day at the factory, so practicing taekwondo is my way of relaxing,” Sagala said. “I can also spend time with my friends after class in Wongok-dong.”

However, although the center has greatly contributed to helping Ansan’s foreign population get settled, Koreans say it is less successful at including them, even though many of them visit the area to experience the vibrant multinational atmosphere.

Markets bustling with foreign workers and their families on weekends are less full during the week, when Koreans tend to visit as part of school or work field trips, Yoon of the Ansan Migrant Community Service Center said.

“The city is most active on Sundays,” Yoon said. “We cannot ask restaurant owners to stay open just for the few visitors who we don’t know when to come, so I usually recommend that people visit on weekends if the purpose of their visit is to mingle with foreigners.”

To create more opportunities for foreigners and Koreans to interact, the center has plans to build a new “experience center” and renovate a library in the center of Wongok-dong.

The new center, on which construction is to begin next year, will house a museum and offer programs about the countries represented in Ansan. The library, which is set to open this month, will collect books from these countries in addition to offering related programs.

“The two buildings will encourage more families to come and spend time in the area,” Yoon said.

The center’s efforts to bring Koreans and foreigners together may be indicative of what Korea will have to do in the future if it wants to be truly multicultural.

“If you come down to Ansan, you see this [people of different nationalities]. But you don’t see it in other areas,” said Suzanne, 36, an English teacher and resident of Sanbon-dong in Gunpo, which is near Ansan. “But if you look back to 10 years ago, [there was] no chance to see international people. In that sense it’s changed quite a lot. But it’s a slow change.”

Noble Ekeroman, a businessman from Nigeria who attended the International Unity Festival, says Korea should do more to promote understanding between Koreans and foreigners.

“We want the government to really make us feel more at home,” Ekeroman said. “We have so many Koreans back in Nigeria and ... the Nigerian government is doing a lot to make them feel comfortable. But the government here is not doing so much for us.

“We understand the cultural differences and we understand that Korea is a conservative society, but the government could do more by opening their arms and embracing everybody.”

Language is one barrier to understanding, Ekeroman says.

“It’s not like Koreans are not interested in embracing us, but because there’s a language difference it’s very difficult. They cannot understand us and we cannot understand them,” he said. “But people who can speak good English can help [us] understand each other more. Especially the media, if they portray us in a good light then all the people will embrace us.”

Josie Cruz, 36, a Filipina from the city of Siheung who has lived here for 11 years and is married to a Korean man, said cultural preservation is also a concern. She said she has participated in the International Unity Festival for the past two years.

“For me, it is important to keep my cultural traditions,” she said.

At this year’s festival, she said she and her group presented a dance practiced by the Igorot people that is mostly performed in the city of Baguio in the Philippines.

“Another reason I keep practicing these dances is because it has become my own way of forming ties with Koreans. When Korean people want to learn some dance moves, I teach them,” she said.

She believes her efforts have gone a long way toward fostering understanding and reducing discrimination. “Before, when Korean people saw us, they’d say, oh there go the foreigners,” she said.

“But since we’ve shown them that we are just people that are not at all different from them, I feel the discrimination against foreigners has diminished.”

Park Jun-seon, another frequent visitor to the festival, who married a Filipina in 2005, has similar hopes for the future of multiculturalism in Korea. He regularly brings his children to events like the festival to help educate his children about the Philippines.

“It hasn’t been easy to get to the Philippines since our children were born,” Park said. “Instead, I take my children to these multicultural towns and to multicultural events like the International Unity Festival so that they can understand the culture of the country their mother is from.”

But although he is keen to participate in events with the “multicultural” label, he also has concerns about the limitations such a label present.

“Calling us a ‘multicultural family’ defines us in a certain way and is discriminatory in that it signals that we are different from other families,” Park said. “I understand that these events need to have a certain name to be properly introduced to many people, but I hope we eventually just become the ‘neighbors’ and not that ‘multicultural family.’”