Beyond the trickle-down effect

Beyond the trickle-down effect 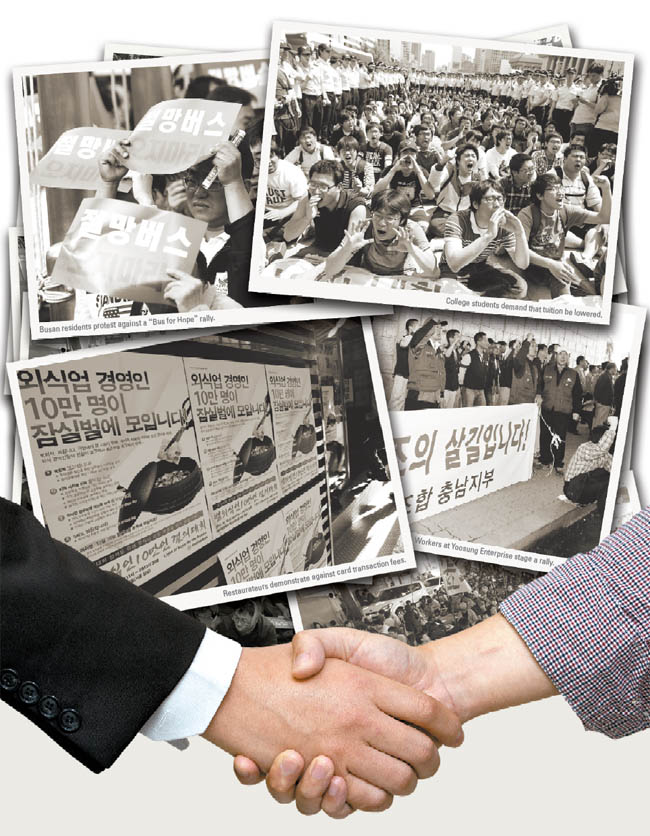 Hwang Seung-won, 22, came from a financially troubled family, but he was determined to go to college. After his father’s business went bankrupt, the family was hounded by creditors and had to keep moving. Hwang was forced to drop out of high school, but he passed a high school equivalency exam and gained admission to the University of Seoul.

Paying the 4.9 million won ($4,200) annual tuition was going to be a struggle since his mother only made 1 million won a month working in a restaurant. But two days after finishing his compulsory military service last May, Hwang found a job repairing industrial refrigerators at discount stores, which paid 1.5 million won a month.

On July 2, a worker at an E-Mart outlet in Ilsan, Gyeonggi, checked on the repair work on one of its cooling units and found Hwang and three other workmen unconscious. Leaked gas had incapacitated them. All four died in the hospital.

“My son told me not to worry about his tuition,” his mother told reporters. “I asked him to get an easier job, but he told me it was fine because it paid a lot.”

Korea is renowned for pulling itself from the ruins of war to become an industrial powerhouse and a developed economy, while also abandoning dictatorship and fully embracing democracy - a troika of accomplishments achieved by few other countries since World War II. A year ago, it became the first non-Western country to host the Group of 20 meeting, a gathering of the world’s 20 richest and most influential nations.

Korea’s gross national income per capita has reached $20,000. According to the government’s national competitiveness report released at the end of last year, Korea ranked 25th in terms of GDP per capita among the Organization for Economic Cooperation and Development countries. It is the home of global brands like Samsung, Hyundai, SK and LG.

However, beyond the successes, Korea is starting to wonder if the Korea Inc.-centered economic machine it has built is fair, justifiable - and built to last. In the past, neoliberalism and relentless competition were the engine blocks of the country’s market economy, but now there’s more awareness of people like 22-year-old Hwang, who despite having all the Korean virtues - a steely work ethic, a determination to get a degree to pull his family out of want - was somehow allowed to be ground up in the machine. Too many like Hwang have struggled and failed to share the benefits of the country’s overall success.

Since the Asian financial crisis of 1997 and 1998, economic growth without boosted employment has become a problem, as companies increased their number of non-salaried workers and moved manufacturing abroad. Korea’s wealth gap is growing.

“The economy grows but wealth is only distributed to the rich and large companies, and most of the public and small and midsize companies are becoming poorer,” Park Seung, former governor of the Bank of Korea, said in an interview. “Now the public is angry. We’ve entered a stage where market principles cannot solve all our problems.”

According to Statistics Korea, the country’s middle class only accounted for 67.5 percent of the population last year, down from 76.3 percent in 1992.

There are two main factors in that drop. One is a large number of workers retiring because of the aging of Korean society and also a fall in the age that people retire. A newly coined term, sa-o-jeong (literally “4, 5, retire”), refers to the number of people retiring when they reach their 40s or 50s.

The second factor is Korean companies’ increasing reliance on casual or contract workers rather than more expensive full-time, salaried employees.

According to the Korea Labor and Society Institute, the number of nonregular workers in the country was 8.3 million as of March. According to government statistics, however, the figure is lower at 5.8 million. Nonregular workers are paid around half as much as regular employees and usually don’t get health or unemployment insurance.

“Korea has the largest number of nonregular workers among OECD nations and our wage disparity is the biggest,” said Kim Yoo-sun, executive director of the Korea Labor and Society Institute in an interview. “There needs to be some social guidelines that can drastically upgrade the conditions for nonregular workers. Wealth from Korea’s economic development has been monopolized by the haves and everything can’t be left to the market. The government should step in and try to reduce economic inequality.”

The OECD released a Better Life Index report on the 50th anniversary of its founding at the end of last year. The index evaluated 11 categories, including living, career, income and education. In a category measuring life satisfaction, only 36 percent of Koreans surveyed said they were satisfied with their lives, far below the OECD average of 59 percent. The report said Korea had the longest working hours among the 33 OECD nations at 2,256 hours a year, much higher than the average of 1,739 hours.

Korean’s lack of satisfaction with life is borne out not just by answers on a survey.

According to the Ministry of Health and Welfare, Korea has the highest suicide rate among the 33 OECD member countries. As of 2009, 28.7 per 100,000 people committed suicide. The ratio is 1.5 times Japan’s 19.1 and 10 times the 2.9 of Greece, the lowest in the OECD nations. There has been a drastic increase in the suicide rate among young adults aged between 20 and 30. Suicide is now the most common cause of death for Koreans between the ages of 10 and 30.

According to the Korean Association for Suicide Prevention, difficulty finding jobs is one of the main reasons for the increase in suicides among young adults.

Korea’s unemployment among young adults is 8 percent, which is rather low among the OECD nations, but that’s misleading: people who attend school, do military service or give up looking for jobs are not counted. The employment rate for young Korean adults is 40.3 percent, the lowest in the OECD.

Recently, young students marched on the streets of central Seoul to demand the government do something to lower college tuitions. As the country’s average tuition rate is the second-highest among OECD countries, students graduate with a lot of debt that must be repaid - which isn’t easy when jobs are hard to come by.

“We cannot enhance people’s happiness if we only pursue economic growth,” Rhee Jeong-jeon, a Seoul National University professor specializing in environmental studies, said in an interview. “With fast economic growth, we’ve put too much faith in the power of money. We thought that money could bring happiness. The competition is overly fierce. People are suffering from a lot of stress and working late just to make money. People would be unhappy if the society cared only about making money with other values being overlooked.” 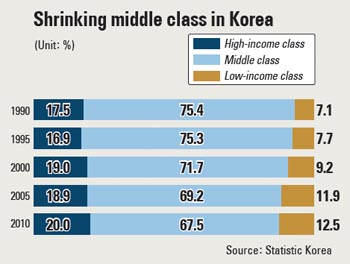 Korea quickly recovered from the global financial crisis in 2008 and 2009. And at the present moment, its economic fundamentals are probably better than ever. The country’s leading conglomerates benefited most from the worldwide economic recovery. In contrast, small- and medium-sized enterprises and contractors and suppliers to the behemoth companies are still suffering.

Kim maintains that large companies need to guarantee a certain level of profits for SMEs. Then, the smaller companies can invest in research and development and supply better products. It would be a win-win situation for both large and smaller companies, he said.

Recently, large companies have been blamed for entering fields of businesses once dominated by SMEs, or even mom-and-pop stores. A large discount-store chain started selling discount fried chicken, but after strong resistance from small businesses, it stopped. Many large companies have been criticized for so-called MRO businesses, taking away jobs from SMEs that specialize in maintenance, repair and operational services.

From the beginning, the Lee Myung-bak administration has championed pro-business policies. It tried to sort out and eliminate unnecessary regulations. However, since the ruling Grand National Party lost by-elections early this year, the government changed its focus to what it calls “shared growth.” For months, the government has been trying to bully the conglomerates into going easy on smaller competitors, and to share the wealth with its subcontractors and suppliers.

The Fair Trade Commission, in particular, pressured retailers to cut commissions charged to small and midsize vendors in their stores and encouraged conglomerates to sign mutual growth agreement with SMEs. However, analysts say the administration’s twisting of the arms of large companies can only be a short-term measure.

“We can’t expect large companies just to be generous,” said Kim Yoo-sun of Korea Labor and Society Institute. “There needs to be some legal measures to achieve that.”

“Korea’s GNI per capita is $20,000, but due to widening economic disparities, 80 percent of the country’s population has less than $20,000 in annual income,” Rhee of SNU said. “Even if the government cut taxes and pushed deregulation, only 20 percent of high-income earners would benefit and it wouldn’t affect the 80 percent. If the government redistributes wealth and raises incomes for the 80 percent, the level of happiness of the entire population will increase.”