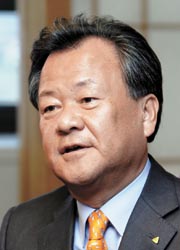 “I was appalled when I first took the job to learn that Kepco was hit by total deficits of 6 trillion won ($5.27 billion) over the past three years,” Kim told reporters at his first press conference since taking over the helm in September.

“Although power bills were raised in August, Kepco is still seeing an estimated 2 trillion won deficit,” said Kim, the former head of Hyundai Engineering and Construction.

“This was caused by the sharp rise in prices of bituminous coal in 2007 and 2008, and the company had to guarantee profits for its power generators. Moreover, Kepco is selling power at 90 percent of the unit cost, so this needs to be adjusted,” he said.

Kim said the unrealistically low price of electricity led to the nationwide power-cut in September, which was unprecedented, as well as distorted patterns of consumption in industrial sectors.

“For instance, casting plants prefer electricity to kerosene since power is much cheaper than oil in Korea,” he said.

To tackle Kepco’s large deficits, he pledged to cut investments to appropriate levels.

“Kepco has been making investments in many areas, so it is saddled with significant debt,” he said.

“We need to come up with our own measures to improve our bottom line, such as by finding profit sources in overseas markets.”

Kim stressed the importance of shoring up the company’s fiscal soundness so as not to see opportunities squandered.

“Foreign partners will ask about Kepco’s financial capabilities, and high financing costs will increase the risk of us losing power plant orders from abroad,” he said.

Kim called to better integrate the way in which power supply and demand is managed.

“It might not be easy, but there is certainly a need to reorganize the electricity industry,” he said.

“The way the sectors are separated at present is not ideal and it would be better if they were integrated to reduce losses stemming from having reserves that are too large.”