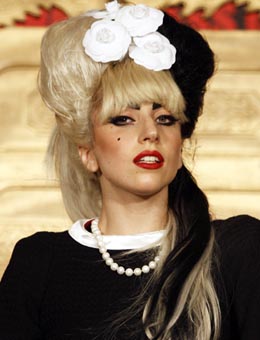 “I always wanted to have one, and I was hoping that it didn’t involve pills and a strand of pearls,” she joked.

The envelope-pushing pop superstar was one of several musicians who performed Saturday night at the Hollywood Bowl during a concert celebrating the 10th anniversary of Clinton’s foundation, which has sought to improve global health, strengthen economies worldwide, promote healthier childhoods and protect the environment.

Lady Gaga similarly serenaded Clinton and changed several of her lyrics to reference him, including swapping the title of “Bad Romance” for “Bill Romance.”

“I thought, my God. I get Lady Gaga, and I will have a heart attack celebrating my 65th birthday,” Clinton later said.

Clinton, who turned 65 on Aug. 19, celebrated his birthday at a posh Hollywood party Friday with wife Hillary and daughter Chelsea.