Leave me be, says Lohan, ‘I am working hard’

Leave me be, says Lohan, ‘I am working hard’ 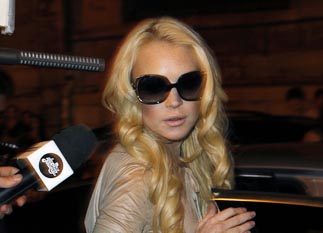 LOS ANGELES - Actress Lindsay Lohan on Friday struck back at suggestions she was shirking tasks assigned to her under a court-ordered probation, saying the media speculation to that effect has “no truth” to it.

The reports surfaced only days ahead of a progress hearing on her probation and resulted from Lohan switching her community service program after missing sessions at a Los Angeles women’s shelter.

Lohan, 25, was sentenced to 360 hours of community service earlier this year as part of her sentence for stealing a gold necklace from a jewelry store. The “Mean Girls” actress also served 35 days under house arrest. The judge in the case warned Lohan to take the requirements seriously and complete her community service on time. If not, she might violate probation and be sent back to jail. Lohan has until May 2012 to complete the program and is due to return to court on Oct. 19 for a progress meeting.

Celebrity Web site TMZ.com said Lohan repeatedly failed to show up at the women’s center and when she did, she stayed less than the required four-hour session.

Lohan, whose once promising movie career has been derailed by multiple trips to jail and rehab since 2007, did not address the allegations in detail.

But she responded on Twitter saying: “I am not to be made an example of anymore. I am working hard and fulfilling my obligations every single day, to the court as well as myself. If I travel, it’s for work and it’s been approved.