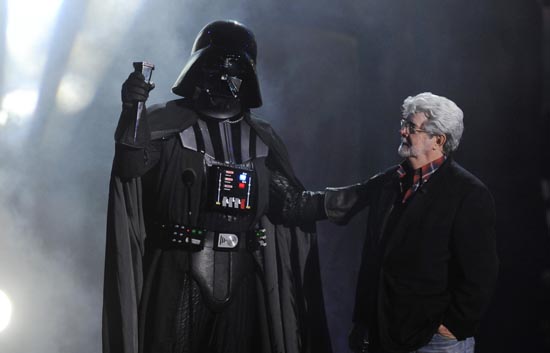 UNIVERSAL CITY, California - Heroes and villains from the worlds of horror, fantasy and science-fiction shared the stage at Spike TV’s annual Scream Awards.

Resembling a psychedelic circus, one side of the stage was a life-sized dollhouse populated by costumed characters, the other a staircase topped by a giant keyhole, and in the middle was a lake that lit up with fire.

Harry Potter took the night’s top prize. The eight-part film franchise was named the Ultimate Scream, which awards presenter Chloe Grace Moretz described as “the most awesome, most rocking thing that the universe has ever seen.”

Audience members were given glow sticks before the winner was announced, and when “Potter” star Daniel Radcliffe accepted the prize by video from New York, fans there were waving the same lights.

Darth Vader, though, won the Ultimate Villain award. “Star Wars” creator George Lucas presented the Sith Lord with his prize. Vader, who accepted the award personally, said he’s found it difficult to concentrate on his work recently because he’s constantly “living in fear of how George Lucas is going to digitally enhance you for the next DVD.” Meanwhile, Lucas announced that the first “Star Wars” film converted to 3-D will open in February.

Pee Wee Herman, also known as actor-comedian Paul Reubens, rode his shiny red bicycle across the lake (on floaties) to accept the Visionary award. When Nicolas Cage received the Maverick award from director Quentin Tarantino, a motorcycle appeared on stage and the lake blasted with fire, a reference to his film “Ghost Rider.”

Before Robert Downey Jr. accepted the Hero award, audience members were given placards emblazoned with his image and the word “hero” and told to raise the signs when the actor made his entrance. They practiced a few times before the big moment. Colin Farrell introduced the “Iron Man” star by saying, “No one plays the hero with more swagger than this man.”