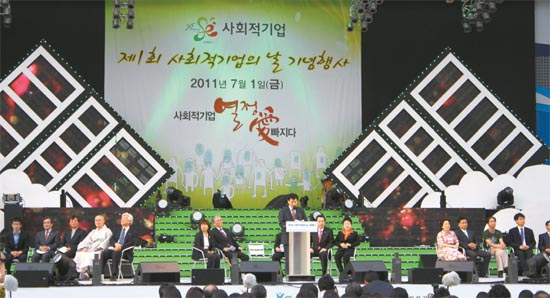 The Ministry of Employment and Labor and the Korea Social Enterprise Promotion Agency designated July 1 as Social Enterprises’ Day from this year. There were 1,537 social enterprises in Korea as of June, according to the agency. [JoongAng Ilbo]


The Korea Breast Cancer Foundation, established by Amore Pacific in 2000, is just one example of a new wave of corporate activity that is sweeping across the country in the form of socially responsible initiatives as businesses get more involved in their communities to support the less privileged.

The foundation set up by Korea’s No. 1 cosmetic firm stands as the first nonprofit organization to raise awareness of breast cancer prevention here. It has been offering free medical screenings for women with disabilities or who reside in social welfare centers, as well as conducting free lectures to promote cancer check-ups at hospitals nationwide. Since 2001, it has held an annual pink ribbon marathon in five cities that has collected a total of 1.5 billion won ($1.3 million) in donations.

As more domestic companies see the need to reinvest in their communities, profit and nonprofit organizations like these have been popping up across the country, creating jobs and providing health, educational and other services along the way.

While the United States and several advanced countries in Europe experienced a boom in this area in the 1970s and 1980s, Korea is a relative newcomer to the field after it jumped in four years ago when the Labor Ministry created a law to nurture social enterprises. This led to the creation of the nonprofit Beautiful Foundation that same year. 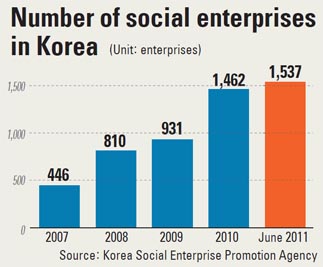 The number of social enterprises has grown to 1,537 as of June and more are awaiting government accreditation - remarkably different from the 446 registered by the end of 2007. The government went one step further this year by designating July 1 as Social Enterprises’ Day, and Labor Minister Lee Chae-pil pledged to continue to nurture such ventures among a range of sectors.

Now many large companies have set up nonprofit organizations independently or in partnership with NGOs, taking a market-based approach to address social issues such as education, poverty and medical treatment.

Kyobo Life Insurance, for example, has created a small army of professional caregivers as it has invested 12.8 billion won in the Dasomi Foundation, which it set up in 2003 together with the Work Together Foundation. The center has effectively taken 260 women from poor backgrounds and taught them how to help others in order to create an income and generate a positive ripple-like effect throughout the community.

And last month, steelmaker Posco set up Posco Housing to construct environmentally friendly houses, factories and offices built by workers from low-income families, unemployed youth and the elderly. Two-thirds of the profits will be used to create new jobs, it said.

Meanwhile, SK Group poured 1.5 billion won into establishing its Happy Library Foundation in May to refurbish old community libraries in apartments across the country.

Local housing law mandates that tenement buildings with over 300 households each build a library.