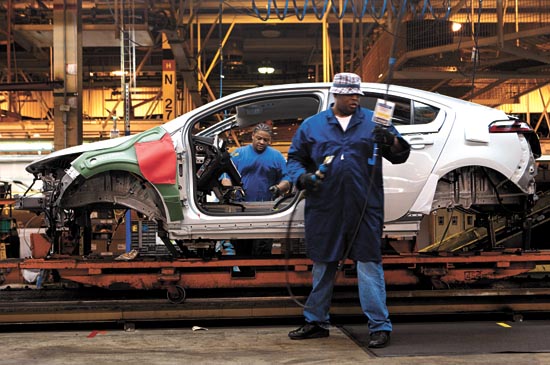 
DETROIT - In a TV commercial that screens several times a day with the morning news on Channel 7 in downtown Detroit, a typical working-class woman in her twenties sings the praises of the Ford Focus compact.

“I love how this number goes up and up,” says the woman while driving around a metropolitan setting, referring to the fuel-efficiency gauge that tracks how much remaining distance she can drive with a full tank of gasoline.

“At this rate, I can drive for, like, a month,” adds the woman, who is dressed casually in jeans.

Despite the fact that the city is still recovering from the near-fatal battering the U.S. auto industry took as a result of the 2008 global financial crisis, last week champions of Detroit, including Mayor Dave Bing, stressed their pride at being “the city that put the world on wheels.” 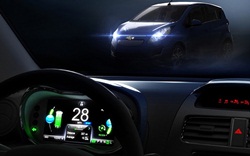 But how those wheels have changed.

Gone are the advertisements of pickup trucks set against majestic vistas, SUVs conquering hostile terrain and “Like a Rock” ad slogans for the Chevy. In their place as the favored headliners are small and environmentally-friendly models like the Chevrolet Volt and Cruze.

Behind this sea change in the focus of U.S. automakers is a fundamental switch in terms of consumer choices.

Now, U.S. auto giants are hoping their bet on small and electric cars pays off in the U.S. and global markets to cement their status against their Japanese and Korean rivals, which are recognized for their prowess in manufacturing fuel-efficient compact cars.

Last Wednesday, during a weeklong media event commemorating the 100th anniversary of the Chevrolet brand, the showroom at the GM Design Center in Warren, Michigan, displayed five cars.

They were chosen as the newest frontrunners in General Motors’ current product lineup; namely, the Chevrolet Cruze, Spark, Aveo (called the Sonic in the U.S.), Colorado and the next-generation Malibu.

Four out of the five were sedans, while three were either subcompact or compact models.

Industry watchers said this skewing toward smaller sedans by U.S. automakers - formerly known for their gas-guzzling behemoths - is aimed at consumer tastes that have been downsized since 2008. The bailout of GM and Chrysler Group LLC in 2009 also persuaded them to fine-tune their products more closely to the market, analysts said.

“There are several reasons why U.S. automakers failed, but one of the keys is that they ignored the sedan,” said Kang Sang-min, a Seoul-based auto industry analyst with Hanwha Securities.

“They only paid attention to the pick-up, and suffered when the market for sedans expanded and people’s tastes veered towards smaller cars due to higher oil prices.

For GM, the largest U.S. automaker, the drive to race past its foreign competitors by providing better rates of fuel efficiency has put the Chevrolet Volt - its “extended-range” electric car - on a pedestal within the brand. Now executives praise it by saying that it only ranks second to the Camaro and Corvette as an iconic car.

“The Volt has an overall halo” said Mark Reuss, president of General Motors North America. “The more customers are aware of the Volt, the better their perception of Chevy is.”

For GM, going small and electric was possible by utilizing the skills and know-how of those who already knew how to make small cars and “electrify” them well. One example of this is GM Korea and LG Chem, which developed the cells for the Volt’s electric battery.

“It was the design team in Korea that developed [the Cruze], and it’s been a big hit wherever it goes,” said Ed Welburn, vice president of global design at GM. “The Sonic was also designed in Korea by a team that really understands how to design small cars.”

The next-generation Chevrolet Spark, for which a U.S. launch was announced last week, is tellingly based on the Daewoo Matiz from GM Daewoo - renamed GM Korea in January.

However, this dependence on reworking old lineups is also seen as a limitation by some observers.

“They say that U.S. automakers are focusing on smaller cars, but the cars they are releasing are all old lines with model changes,” said Yang Hee-joon, an auto industry analyst with Meritz Securities.

“The Ford Fiesta has been around for decades; the Chevy Spark is actually the Matiz revamped. We haven’t seen a real step-up by U.S. automakers in this respect, and I don’t think their current strategy is a game-changer.”

Moreover, experts point out that U.S. manufacturers still have some catching up to do.

“Even if U.S. automakers manage to catch up with their Asian counterparts, whether they can turn a profit is up for debate. Hyundai has a cost structure that can create a tidy profit even for an Accent; but U.S. auto companies have notoriously bad cost structures.”