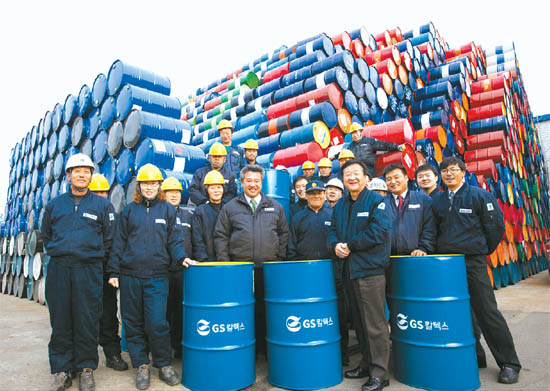 
GS Caltex is continuously working on co-development. In December 2010 GS Caltex received over 90 on the score card for co-development and fair trade agreements, as announced by the Fair Trade Commission. This means that the effort that GS Caltex put into various co-development projects and activities is showing good results and has been acknowledged.

The Triangle Cooperation Program, or TCP, which conglomerates and subcontractors promise to stick to for fair trade and epigyny cooperation, and the Fair Trade Commission evaluates the current situation and provides incentives.

Even in 2011 the company is adopting additional support programs to increase support to its subcontractors. One of the new programs is the exempt on guarantee on defects in addition to the performance guarantee exemption, operation fund, facility fund or loan support for technology development for excellent long-contract subcontractors.

GS Caltex has also launched the GSC co-development subcontractor committee which is a consultative group of subcontractor representatives which is different from the previous subcontract committees and meetings held by industrial departments. This is to exchange ideas and discuss the major issues with the subcontractors. The subcontractor employees will be able to use the rest centers set up for and in the second half of the year GS Caltex will promote the products of outstanding subcontractors on its Web site and also establish and support a voluntary compliance program for subcontractors.

The No.3 heavy oil upgrading (HOU) of GS Caltex that was completed in 2010 has created thousands of jobs. The construction contributed greatly to activating the economy of the local society.

In addition GS Caltex has decided to invest 1.1 trillion won and construct No.4 HOU. The construction kicked off in March this year and the facilities, scheduled to open in 2013 will be constructed at the Yeosu second factory site. During the construction about 1 million jobs will be created.

GS Caltex has a principle to make payments with small- and medium-sized subcontractors in cash for its products and human resources at the earliest time possible, reducing the financial burden on those subcontractors.

In December 1997, it established firm banking for the first in Korea so the company will automatically credit payments to the subcontractor’s account so they will not need to visit to collect the payment. It is introducing advanced cases from overseas to its subcontractors so they can adopt what they need and also supporting technology and consulting and also helping to improve its quality.