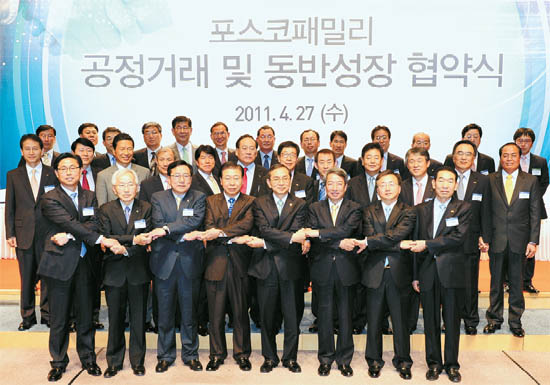 Posco Chairman and CEO Chung Joon-yang and the CEOs of its 12 subsidiary companies along with subcontractor representatives take a photograph at Posco Center after the Posco Family Fair Trade and Co-development Agreement.

The company suggests ideas to increase the life of products, reduce costs and localize the imported parts and often conducts projects together. This has become one of Posco’s main co-development policies that gives real benefits to small- and medium-sized companies.

Posco has introduced the “Quick-Benefit Sharing” system for simple tasks where no test product is needed to activate participation in the program. By reducing the pilot product testing phase the previous eight phase program has become a four phase program and the timeline has shortened by one month from the previous six months, encouraging many small- and medium-sized companies to participate.

In addition Posco is also preventing company worries with regard to technology information leaks. To prevent ideas from being exposed to other small- and medium-sized companies, Posco has introduced a Benefit Sharing Case Agreement.

Chung Joon-yang the chairman and CEO of Posco said, “From the previous sharing-the-pie era, the paradigm has changed to growing the pie itself to increase the piece for everyone.

One of the three management philosophies of Posco is ‘open management’ and this is a co-development through faith of all interested parties.”

In addition he said, “co-development is one of the core values of Posco and we are working on epigyny with small- and medium-sized companies. Moreover we hope that conglomerates and small- and medium-sized companies will overcome the epigyny relationship and have a future-oriented relationship that of improves competitiveness and development together.”

At the Posco Family Fair Trade and co-development Agreement in August 2010, Posco E&C, Posco Specialty Steel and some of its investment companies participated showing the will of co-development that has expanded to the Posco family.

In October 2010, Posco and its subsidiary executives founded the ‘Posco Family co-development Supporting Organization” and is providing management consulting, technology support, helping to open overseas markets, education and training as well as financial support with one executive in charge of a certain subcontractor.