A bicycle with President Lee Myung-bak’s autograph was auctioned off at the highest price of 12 million won (10,379 dollars) yesterday during the WeAJa charity flea market. By Kim Do-hun


Chieko Machida, 50, a Japanese woman from Yeoju, Gyeonggi, was busy laying out freshly baked muffins and biscuits to sell at the WeAJa charity flea market at World Cup Stadium in Sangam-dong, western Seoul, yesterday. Machida, who came to Korea 20 years ago after marrying a Korean man, is a member of the Yeojugun Multicultural Family Support Center, which opened up a booth at the flea market to sell organic coffee and baked goods for a good cause.

“Eighty percent of the profit we make today will be donated to this event, which goes to children from lower income families,” Machida said. “This is the center’s first time to participate in WeAJa, and I’m so glad to have a part to play in helping out the children in need that would probably include children from multicultural families.”

Beside Machida, Phung Thi Hoa, 30, from Vietnam, who was wearing a long, pink traditional Vietnamese dress, was getting ready to present Vietnamese culture.

“I brought Vietnamese traditional artifacts and goods to show people about my culture,” said Hoa, who came to Korea seven years ago when she married a Korean man. “We have also organized an event for people to experience traditional Vietnamese games.”

The Yeojugun Multicultural Family Support Center’s booth was among 300 booths from 47 different organizations that came to the seventh annual charity flea market WeAJa in Seoul, run by the JoongAng Media Network together with the Seoul Metropolitan Government and the Beautiful Store. 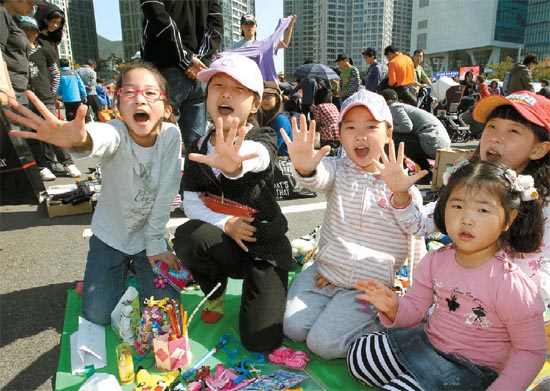 Children sell their secondhand goods for 500 won each at Busan’s WeAJa market yesterday in the outdoor parking lot of Centum City. By Song Bong-geun


The same event was also held in Daejeon, Busan and Jeonju, North Jeolla, attracting in total about 360,000 people and 128 organizations, according to the organizers. The proceeds from the four markets, about 140 million won ($121,000), will be donated to underprivileged children supported by We Start, a charity organization run by the JoongAng Media Network.

This year’s event was organized under the theme “Temperature of love UP, temperature of earth DOWN” to place special significance on saving the earth.

At the Seoul market about 230,000 people turned up to put their secondhand items on sale or to look for good deals despite sudden pouring rain just before the market kicked off at around noon yesterday.

Organizers said all four markets throughout the country had so many visitors all afternoon that people could not shop without bumping shoulders.

Hwang Young-sook, 54, from Seoul, said that she came to purchase baby clothes for her about-to-be-born grandson.

“I wanted to share the meaning of saving and sharing with my daughter and her soon-to-be born son,” Hwang said.