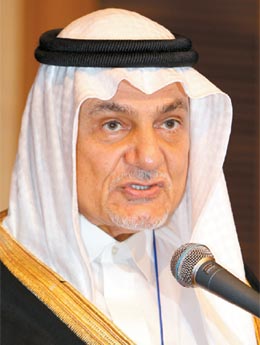 Saudi Arabia recognizes Korea’s rising international status and will try to learn from its ambition for self-enhancement, according to Prince Turki al-Faisal of Saudi Arabia yesterday.

Prince Turki, a nephew of King Abdullah and former Saudi ambassador to the United States and United Kingdom, has been on a five-day visit to Korea beginning Thursday.

At a press conference in a Seoul hotel yesterday, he said the ratification by the U.S. Congress of the Korea-U.S. FTA last week exemplifies Seoul’s increasingly recognizable global influence.

“It was quite clear that the United States wanted to show its appreciation of the position of Korea in the world, not only in terms of the free trade agreement, but also by the ceremonies and protocol procedure and the address at a joint session of Congress,” Prince Turki said. “That is very indicative of how the United States feels about its relationship with Korea.”

The prince, 65, said he has witnessed Korea’s rapid development closely through four visits to the country since the 1970s. His third visit to Korea was in 1988, when Seoul hosted the Summer Olympic Games, an event that he said impressed many across the world including himself.

“Korean people have shown to the rest of us the degree of ambition to raise the standard of living that is quite admirable and should be emulated by others,” he said.

The latest visit of Prince Turki, currently chairman of the King Faisal Center for Research and Islamic Studies, was aimed at discussing strengthening ties with Korea ahead of the 50th anniversary of the bilateral diplomatic relationship next year - yesterday was the 49-year anniversary of the two forming diplomatic ties.

He attended the eighth Korea-Middle East Cooperation Forum held on Friday in Jeju and is scheduled to meet Prime Minister Kim Hwang-sik and Minister of Foreign Affairs and Trade Kim Sung-hwan today to share ideas about bilateral cooperation.

With a degree in international relations from Georgetown University, the prince is thought of as a potential candidate for the next Saudi foreign minister, according to a Seoul official. He was named in 2009 one of the 50 most influential Arab figures by The Middle East, a U.K.-based magazine specializing in the region.

Asked about the impact of the Jasmine Revolution, the prince said his country has kept a “stable” political situation without similar occurrences. He said the movement is still a work in progress. He feels reluctant to call it the Arab Spring, because there has been too much “bloodshed.”

“Nonetheless,” he said, his country acknowledges its system can be faulty and will try to improve those possible flaws.

Women’s political status is also not exempt from possible improvement, he said. King Abdullah announced in late September that women in the country, who endure some of the strictest limitations on women’s social and political participation in the world, will be given the right to run for election beginning in 2015.

“It is another step in the development of political activity in the Kingdom,” Prince Turki said.

He said the country will try to learn from the experiences of other countries, but he noted that it would be a reference rather than a model to follow.

“We have our own history, our own culture and our own identity. I don’t think someone else’s clothes should necessarily fit us,” he said. “You have to tailor yourself what you wear ... but if your style is nice, I will copy your style.”