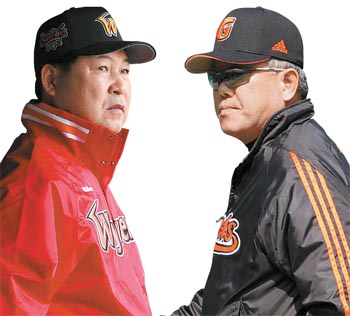 With the second-round playoff series tied at 1-1, the Busan Lotte Giants and Incheon SK Wyverns are hoping their starting pitchers and key batters will step up in game 3 tonight at the Wyvern’s home field, the Munhak Baseball Stadium.

At the moment, baseball pundits are split on who will eventually win the Korea Baseball Organization (KBO) best-of-five series to face the Daegu Samsung Lions in the Korean Series, but they agree this game is critical.

“With Ryan Sadowski of Lotte and Song Eun-beom of SK starting in the third game, I think this game will be the key for the series win,” MBC commentator Heo Gu-yeon said to Ilgan Sports, JoongAng Ilbo’s daily sports newspaper yesterday. “I believe this series can go to game 5.”

Both teams’ starting pitchers are clashing for the first time in this season. The Wyverns starter Song has went 8-8 with one save and a 3.43 ERA in the regular season. The 27-year-old was originally slated to start on Monday, but was replaced by Brian Gordon due to cold symptoms.

The statistics show that Song hasn’t played well against the Giants this season, going 1-2 with 5.09 ERA in seven games. But the right-handed pitcher has an impressive record on his home field this season, collecting five of his wins at home with a 3.02 ERA. He also pitched well in the post season last week against the Kia Tigers, allowing only two runs in six innings with five strikeouts.

Meanwhile, the Giants’ Sadowski, who had a 11-8 record with a 3.91 ERA in the regular season, hasn’t failed to impress against the Wyverns. During his five starts against the Wyverns, the 29-year-old American marked only three losses with a 5.08 ERA. The Giants said that Sadowski recently performed well during practice and was well-rested.

While the starting pitchers will be an interesting matchup, pundits are also saying that both teams’ cleanup hitters (fourth player in the batting order) should regain their form to lead the team’s attack.

Especially, the Giants are looking to their first baseman Lee Dae-ho to step up. Lee, 29, was the top batter in three offensive categories (batting average, hits, and on-base percentage) in the regular season, but during the last two matches against the Wyverns, the slugger generated only one hit.

“I believe Lee will do his job,” the Giants manager Yang Seung-ho said. “If Lee does well, we will win the next two games easily.”

The Wyverns are also hoping their veteran Lee Ho-jun will contribute. The 35-year-old team captain, who clinched a game-winning single in game 2 of the first-round playoff against the Tigers, hasn’t gotten a hit yet this series. But the Wyverns interim manager Lee Man-soo was confident that they can win their remaining games at home even though their big hitter is struggling.