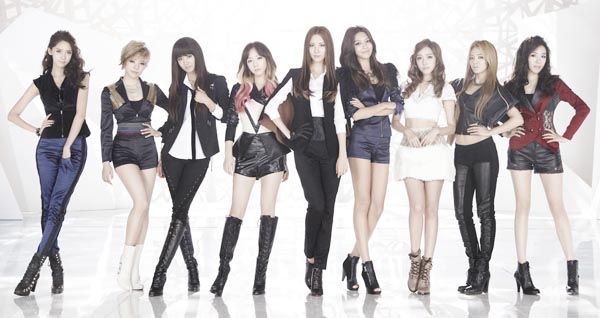 Girls’ Generation returns to the nation’s music scene after an 11-month hiatus with the release of its third regular album. Pictured above, from left, are Yoona, Sunny, Yuri, Taeyeon, Seohyun, Sooyoung, Jessica, Hyoyeon and Tiffany. Provided by SM Entertainment


With the release of its much-anticipated third album, “The Boys,” Girls’ Generation is taking a big step forward with its first foray into the ultra competitive American music market. The album is being released simultaneously worldwide today, and it’s gotten a big boost from the American production machine.

The album was produced by Teddy Riley, renowned for his work with Michael Jackson, and is being released on Interscope, an American label owned by Universal Music Group whose roster also includes such big names as Lady Gaga, the Black Eyed Peas and Eminem.

“The Boys” shows that the girls have grown up since their last outing, and they confirmed this in a recent interview arranged by their agency SM Entertainment. The agency held a round table with the media on Monday, in which it offered a preview of the album and an interview with the nine-member group.


Q. How do you feel about releasing your first album in 11 months and about competing with other girl groups that are releasing albums this month, including your rivals the Wonder Girls?

A. Taeyeon: It’s been nearly a year but we’ve learned a lot from our 14 concerts in Japan. I think we’re the only Korean girl group that has done such a large number of live concerts.

Sooyoung: We don’t see the other girl groups as competitors but are excited about their albums, too. And it’s a great pleasure to see them perform. It’s like going to a concert by any other musician that we love.

[Girls’ Generation performed 14 concerts in Japan starting with Osaka on May 31 and ending in Fukuoka on July 18, attracting 140,000 fans.]

What have you learned from doing so many concerts?

Yoona: I’ve learned how to enjoy myself on stage, how to develop a better stage presence and entertain the audience.

The title track from your new album is very different from your previous hits. The rhythm and lyrics are much more powerful and you also do some rapping. The choreography for the video is also quite powerful. What was your first impression of the song?

Taeyeon: Many of our hits such as “Gee” had hooks but this didn’t. In that sense, this song was new and fresh. Speaking of the choreography, it required much more force. Because we had to use our legs a lot, our legs were always bruised and at one point it was even hard for us to go up stairs.

Seohyun: My very first thought was, “Can we really do this?”

What was it like to work with American producer Teddy Riley?

Taeyeon: We were nervous about it, but he tried to lighten the atmosphere. He even had me dance while I was recording my part.

Yuri: He tried to draw out the best from each of us and was generous about complimenting us.

The album was created to appeal to fans across the globe. Have you ever thought about what it would be like to be listed on the Billboard chart like the Wonder Girls did a couple of years ago?

Tiffany: Releasing an album in the States is meaningful in and of itself. We aren’t expecting more than that.

What differentiates this album from your previous ones?

Taeyeon: Since this album targets a broader range of fans, we tried to include a variety of genres, with a few touches of our own.

Do you have any plans to tour North America?

Taeyeon: We’ll stay in Seoul for now, but if we get the chance we’ll definitely go there.

Taeyeon: We used to live together and had language lessons together but we didn’t do that this time because we were focused on releasing an album worldwide. We did try to get our pronunciation right on our two English-language songs, though.

Tiffany: I still speak in English when I have to say something abruptly. You know, it’s already been eight years [since I started training with the group]. They all understand what I say in English. I think they all have the potential to become good English speakers.

Sooyoung, you wrote the lyrics for the song “How Great Is Your Love.” How did that come about?

Sooyoung: We all received a message asking if we wanted to write lyrics for the song, which is a cute ballad. We were actually on vacation so I failed to submit mine before the deadline. They ended up choosing my lyrics, but they had to change most of them while we were recording so I felt bad for the other girls.

It seems like your music, dancing and overall style have matured. You no longer seem like the cute young girls in white T-shirts and jeans that you were when you made your debut, which has long been part of your public persona.

Sooyoung: We try to show our true selves, including our age. When we debuted, we were young and wore white dresses and jeans but now we’re all grown up and in our 20s. I think it’s right to change as we get older.

Seohyun: We don’t stay the same but we always try to grow and mature. That’s the right way to define Girls’ Generation, I believe.