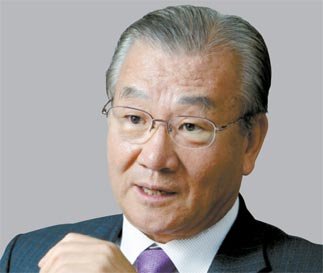 The capital of the U.S. market economy has been filled with Occupy Wall Street protesters for more than a month. Last weekend, citizens of Seoul jumped on the bandwagon and rallied in Korea’s financial district of Yeouido to commemorate the one-month anniversary of the demonstrations in New York. The basic premise of the protests is that the market economy can no longer be trusted. However, others argue that it is not the economic model that is flawed but rather the people and businesses that operate within it and have abused the rules to further their own positions.

Kim In-ho, chairman of the Market Economic Research Institute, is a firm believer in the free-market model. In his office is a piece of calligraphic art bearing the words “Returning to the markets,” which he used for the title of his book in 1999. He served as the chairman of the Fair Trade Commission in 1996, when the position was upgraded to the ministerial level. He also worked as the Blue House’s senior presidential secretary for economic policies in 1997, when the Asian financial crisis hit. At his office in Yeoksam, southern Seoul, on Oct. 12, the JoongAng Ilbo sat down with Kim to talk about whether the market economy can still be considered a successful model.


Q. In President Lee Myung-bak’s celebratory speech on Independence Day on Aug. 15, he described companies’ profit-making as greed. How can we differentiate between the two?

A. I think that only God would be able to draw a line between the two. A business cannot sustain itself unless it is fueled, at least in part, by greed. Businesses are there to turn a profit. And at the end of the day, it is not the president but consumers who decide if certain kinds of profit-making are appropriate or not. If consumers choose to buy a certain product [and the business profits from those sales], we cannot call it greed. Consumers buy it because it is worth the money. The government does not need to consider businesses as being ethical or not. What it needs to do is check whether they are paying their taxes, abiding by the law and following safety measures for consumers. If not, the government is there to play the role of regulator.

Yes, if the economy had not soured, the government would have continued to do a good job of not meddling where it wasn’t needed. But if government aid is expected every time there is a crisis, it would be hard to describe this as a true market economy.

It seems like the government is pressuring companies, especially the big conglomerates.

I would prefer it if the government never asked anything from the big conglomerates and never gave them anything either. The authorities don’t need to order businesses to cooperate with certain policies, or order them to donate more to society. They can just take the line that companies should do what they need to do or accept the consequences. I also strongly believe the Blue House needs to stop having so many meetings with senior executives from big conglomerates. This gives people the impression they have a controlling say in policy. Big businesses should have as much latitude as the regulatory parameters permit, and if the government wants them to shoulder more of the responsibility for helping society, then it can just raise their taxes.

The Fair Trade Commission has been striving to promote the idea of “shared growth,” and it is now coercing businesses to follow this goal. How do you stand on this?

This will be very difficult. There is no clear-cut answer to the question of how to realize shared growth. Businesses pursue profit-making, so they won’t be interested in endeavors that don’t serve this end. As such, to make this idea more widely accepted, the government needs to help big conglomerates work with small- and medium-sized companies. But there are just too many mediocre SMEs, which means that the chaebol are reluctant to forge links with them. If ways of fostering more competitive SMEs are found, shared growth will naturally follow.

So what about the FTC poking its nose into distribution companies’ commission charges? Isn’t this an example of meddling in the market economy?

The president, or prime minister, needs to help the FTC so it can just focus on doing its job of regulating fair trade. The commission needs to divide its time between policy making and imposing regulations. The first task requires an open-minded approach, while the ability to be sharp and exact is vital when imposing penalties for wrongdoing.

How did the 1997 Asian financial crisis differ from the 2008 credit crunch and today’s global economic woes?

In 1997, the problem was domestic. In 2008, it emanated from the United States and went global. The current crisis is much more serious [as it marks an extension from 2008].Some say the current situation reflects how the financial system, based on the principle of a capitalist market economy, is failing. But this is false. The current crisis derived from imbalances among countries in the global community. On one side, there are countries that spend more money than they make, and on the other are countries that spend way less than they make. The United States, Greece and Portugal are willing to spend more than they make, while Korea, Japan and China are trying to keep hold of their foreign currency reserves. This imbalance finally boiled over.

So is it not the case that the global market economy has failed to control this balance?

No, it is actually the opposite. The economic activity we have been seeing lately contravenes the principles of a market economy. The key is the U.S. subprime mortgage crisis. Where in the market-economy handbook does it say that people with no income can buy a house?