Anti-FTA fight starts to get unruly

Anti-FTA fight starts to get unruly 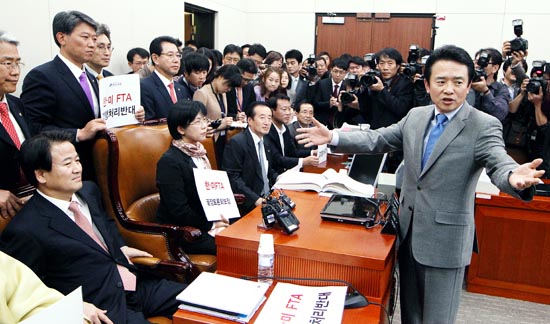 As lawmakers of the Democratic Party and Democratic Labor Party occupy the conference room of the Foreign Affairs, Trade and Unification Committee yesterday to prevent deliberations on the Korea-U.S. FTA bill, Representative Nam Kyung-pil, the committee chairman and a Grand National, right, scolds the opposition lawmakers for disorder. By Choi Seung-shik


All hopes for a smooth ratification of the Korea-U.S. free trade agreement were abandoned yesterday when its opponents occupied a committee room at the National Assembly to prevent deliberations on the bill and a vote.

The ruling Grand National Party planned to open deliberations on the free trade agreement bill in the Foreign Affairs, Trade and Unification Committee in the afternoon. GNP Representative Yoo Ki-june told Yonhap News Agency that the ruling party would attempt to approve it in committee yesterday.

As word spread about the plan, lawmakers from the Democratic and Democratic Labor parties stormed the committee’s conference room and occupied the seat for the committee chairman, Representative Nam Kyung-pil.

Representative Kim Jin-pyo, floor leader of the Democratic Party, said the DP would refuse to cooperate with the bill’s passage unless the government removes “harmful clauses” in the FTA and comes up with thorough compensation measures for farmers, fishermen and small-company workers who will be affected by increased imports from the United States.

As the confrontation peaked, Nam agreed to debates to discuss the FTA for tomorrow and Friday.

Nam also scolded the opposition lawmakers for occupying his seat.

“I feel ashamed before the people, and I cannot accept this situation,” he said. “Today will be the last time for me to endure the minority’s use of physical force. From now on, I won’t allow this anymore.”

The Lee Myung-bak administration has asked the ruling party to pass the FTA as soon as possible so that it can take effect on Jan. 1, 2012. The U.S. Congress ratified the agreement last week in a near-record five days.

The big question now is how fierce the physical struggle will become between the GNP, which holds a majority in the committee and the National Assembly as a whole, and the minority parties who don’t approve of the provisions of the FTA. In Korea, the minority often resorts to physical brawls when the majority party tries to railroad through bills. But the brawls are unpopular with the public, which blames the majority party for arrogance for not trying hard enough to compromise with the opposition.

Representative Hong Joon-pyo, chairman of the GNP, said yesterday he will move quickly to approve the trade deal after the Oct. 26 by-elections. A main session of the Assembly is scheduled for Oct. 28. The Grand Nationals hold 168 seats in the 295-member National Assembly, enough to approve the FTA on their own.

Asked what the GNP will do if the opposition parties resort to violence or physical blockades in the Assembly to block the bill’s passage, Hong said, “If they do, we will break through their barricades.” He added that the FTA approval will be done “in a single stroke.”

On Monday, Representative Chung Dong-young, former DP chairman and the party’s losing candidate in the 2007 presidential election, urged his party to unite against the GNP’s majority. “If a scuffle is necessary, we must do it,” Chung said. “Just because the FTA negotiation began and was concluded during the Roh Moo-hyun administration, we should not get cold feet.” The DP has been criticized for opposing the trade deal, which was first negotiated by liberal president Roh.

The free trade agreement between Seoul and Washington, first concluded in 2007 and revised at the end of last year, has been pending in the committee since last month. The Lee Myung-bak administration submitted the bill to the National Assembly on June 3, and Nam used his authority to push it forward in the committee on Sept. 16 after 106 days of delay due to the liberal opposition parties’ protests.

The GNP has vowed to pass it before the end of this month. If the committee approves the FTA, it will then move to a vote on the floor of the National Assembly. In addition, 14 related bills must be approved for the trade pact to take effect.

Those bills, however, have yet to be discussed at standing committees.

President Lee yesterday continued to seek the legislature’s cooperation. He invited the deputy speakers of the National Assembly, heads of standing committees and the floor leaders of the ruling and opposition parties for a luncheon yesterday to urge the passage of the FTA.

The Democrats, including floor leader Kim and other standing committee chairmen, turned down the invitation.