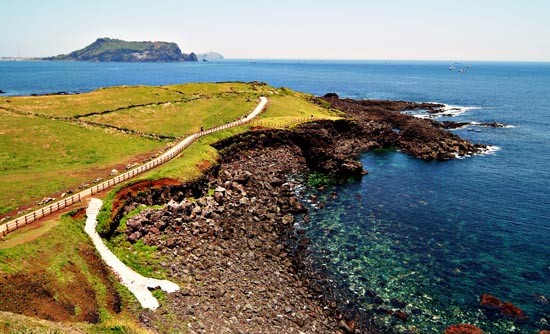 
The dramatic scenery on Jeju Island has long inspired romance among Koreans, so it’s no wonder the country’s biggest island is also its most popular honeymoon destination. But the island’s windswept coasts, volcanic formations and craggy mountain peaks have also served as the setting for the fictional romances conjured by television dramas, movies and commercials.

These programs have in turn sparked a cottage industry based around the drama destinations, especially after the popular 2002 drama “Winter Sonata” proved that tourists were keen to visit the locations where it was filmed. It has been about a decade since that drama ended, but Nami Island, its main location, still draws a throng of visitors year round. The dramas and films featuring Jeju have had a similar effect on its tourism industry.

Now, with Jeju competing against 28 other locations for the New7Wonders of Nature designation, which will be announced Nov. 11, the island’s picturesque attractions may provide it with just enough drama to win.


Subjicoji and the ‘All In’ church

A high stakes bet for love fueled “All In,” a drama series shot at Subjicoji, a two-kilometer (1.25-mile) strip of land on eastern Jeju. When it aired in 2003, the series, starring heartthrob Lee Byung-hun and rising actress Song Hye-gyo, was a massive hit, earning viewer ratings of above 40 percent.

Subjicoji’s main attraction is a small white church that was featured in the drama as the place where Song’s character goes to be a nun after her friends are implicated in the death of a local mobster.

Although the church was damaged by Typhoon Maemi in 2003, it reopened in 2005. Inside, there is a small chapel, displays of props used by the main characters and a small gift shop. It also has a mock casino with card games such as blackjack and baccarat that were played in the drama.

The site’s main environmental attractions are the crystal clear waters of nearby Sinyang Beach, the rocky coastline and the rape flowers that blossom in April.

Subjicoji also offers access to one of Jeju’s most photographed attractions, Seongsan Ilchulbong, a huge volcanic crater just five minutes down the coast.

The crater became even more popular after Daniel Henney and Jung Ryeo-won hiked to the top in the 2005 drama series “My Name is Kim Sam-soon,” which had viewer ratings of 50 percent. The drama also featured Hyun Bin, the star of this year’s hit drama “Secret Garden.”


Udo Island, home of the haenyeo

Udo is a small, tranquil island full of haenyeo, or women divers, who were portrayed in the 2004 film “My Mother the Mermaid.” The film starred Jeon Do-yeon and won the Grand Prize at the Ybari International Fantastic Film Festival in 2005.

Located about 15 minutes from Seongsan Harbor by ferry, the island is small enough to walk around within two or three hours, but other modes of transportation are possible. Visitors disembarking from the ferry are greeted by vendors renting golf carts, scooters and bicycles.

The island gets its name, Cow Island, from its shape, which when viewed from afar looks like a cow lying down.

In addition to offering a scenic view of Jeju and Seongsan Ilchulbong, Udo also promotes its eight palgyeong, or best places: Udo Peak, which offers a panoramic view of the island; a white sand beach on its western shores; and picturesque views of the lights off the fishing boats that provide the income for most of the island’s 2,000 residents. 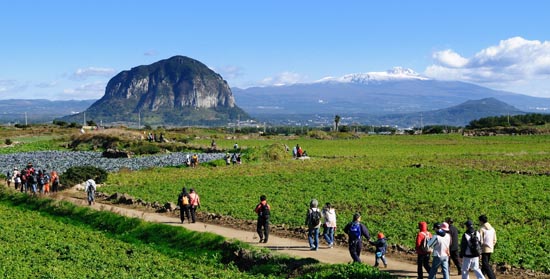 This village became known when it served as the backdrop for “Dae Jang-geum,” a 2003 drama based on the true story of Jang-geum, an orphaned kitchen assistant at the royal palace who later became the first female physician to King Jungjong (1506-1744). Jang-geum had been exiled to Jeju, where she learned medicine, after being falsely accused of treason. The drama earned ratings of more than 50 percent. 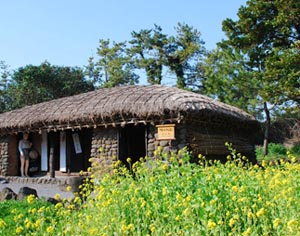 The museum itself exhibits a collection of traditional items that were once used on the volcanic island, most of which are from the late 19th century. The village is made up of replicas of Jeju-style houses with volcanic rock walls and thatched roofs. Its Stone Culture Exhibition Hall provides interesting insight into how volcanic stones were used in everyday island life. Outdoors, there are several examples of stone harubang (which means grandfather in the Jeju dialect) statues along with stone fences, pagodas and tomb markers.