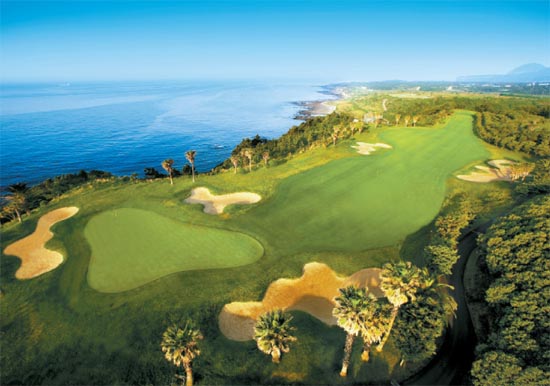 Jungmun Golf Club is the only club in the country with a golf course overlooking the ocean. Provided by the Korea Tourism Organization


Korean golfer Choi Na-yeon’s attention grabbing win in Kuala Lumpur over the weekend gave her her first LPGA Tour victory of the season and the 100th for women golfers of Korean descent. It also raised the sport’s profile in the eyes of Koreans looking to replicate her success.

The better these professionals do in competition, the more Koreans believe they, too, can do well, creating a booming business for the country’s golf clubs.

Jeju, which is aiming to become the country’s top travel destination with its bid for designation as one of the New7Wonders of Nature, gained recognition as a top golf destination after Jungmun Beach Golf Club hosted the first PGA tour in Asia in 2004.

Jeju has seen a steady increase in the number of golf clubs on the island since Jeju Country Club, the first facility dedicated to the sport, opened in 1986. There were 12 country clubs on Jeju back in 2004, but the number had more than doubled to 28 as of last year.

With courses that are as picturesque as they are challenging, island country clubs have become a tourist destination in their own right. In the past, visitors would pack their golf shoes and clubs in case they needed a break from hiking Mount Halla or strolling along the Olle walking trails. These days, however, many travelers head straight for the green.

The golfing destination that has gotten the most play is Jungmun Beach Golf Club, where most of Jeju’s well-known resorts are located. Opened in 1989 and operated by the Korea Tourism Organization, the club is the only one in Korea to offer a chance to tee off on a site overlooking the ocean. Two of the holes on the course are located along a cliff, which makes for a challenging shot and a breathtaking view of waves breaking along the beach below.

Hole No. 5 is particularly unique. Known for its “wind hazard,” with a coastal northwesterly wind that blows faster than 13 kilometers (8 miles) per hour, it has even been known to make the most experienced of golfers tremble. The wind was so strong during the 2004 PGA Shinhan Korea Golf Championship that it interrupted the path of several tee shots including the ones made by Korea’s own Choi Kyung-ju.

After the tournament, the club implemented a new rule. If it is apparent that wind is the reason for a shot going off the tee, players are now given another chance to tee off and can continue to play whichever ball has fallen without taking a penalty.

Lotte Sky Hill Country Club, another golf course just outside of Jungmun Resort, is also notorious for its challenging course. Although the course itself doesn’t require a long tee off to begin with, it does require that the golfer have a significant amount of skill in order to keep the ball from falling into the course’s countless hazards.

From the months of July to September, anyone who spots a whale off of the 14 or 15th hole, both of which are right on the coast, will be awarded a prize such as a voucher for a discounted airline ticket. Whale-watching season is from July to September and prizes are awarded only during this period. For golfers who are a bit off their game, the incentive of a prize could provide a good excuse to focus on spotting a whale in order to win a chance to come back and try again.