Greed comes before a fall

Greed comes before a fall 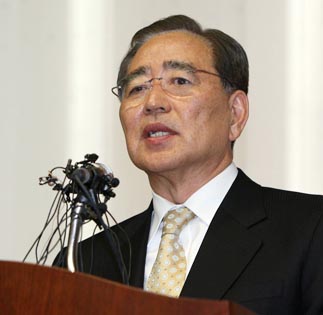 With the financial sector coming under increased attack, Han Dong-woo is feeling the pressure as a member of the 1 percent of the population within the public’s crosshairs.

But the 63-year-old chairman of Shinhan Financial Group, who has been toiling away in Korea’s financial sector for the last four decades, is in no mood for making excuses.

“It is regrettable to hear the financial sector being criticized for its greed, but there are some areas where we should self-reflect,” said Han as he was interviewed by the JoongAng Ilbo at his office in central Seoul on Tuesday.


Q. What is your opinion of the global “Occupy” demonstrations?

A. I feel that the financial sector failed to communicate with society and its customers well enough. The criticism arose because people thought that companies there benefited at the expense of society. So if the local sector does not get recognition for helping people out, especially its customers, the situation in the United States can also happen here.

What needs to be done?

We need to reflect on where we have gone wrong. It is not just about high salaries and dividends. It is about whether the financial sector has actually benefited the world.

The slogan of the protest is “The 1 percent against the 99 percent.” How does it feel to be among the 1 percent?

So far, we have focused too heavily on selling financial instruments like derivatives rather than on our role of supporting customers and businesses. We have separated ourselves from our clients. As a result, there is now a division between the 1 percent and the 99 percent. The solution is to go back to square one. As such, Shinhan selected “Warmhearted Finance” as our new motto.

So the timing of the slogan wasn’t a coincidence?

Actually, I had it in mind even before I became chairman. Our belief is that customers should come first. Following this logic, it would make sense for us to collect outstanding loans from businesses when they are having difficulties and donate some of this money to society.

Also, when we sell our products we should consider our customers. A good example of this is when banks were selling foreign funds or variable insurance policies. At the time, did they really have their customers’ best interests at heart? It is conceivable that many companies bought KIKO currency hedge contracts, or took out yen-based loans, without fully understanding the consequences.

I went to see Ra Eung-chan in 2009, when he was chairman of Shinhan Financial Group, and told him that I did not agree with customers having to bear such heavy losses from KIKO contracts, yen-based loans and mutual funds. I said we should not be involved in these anymore. But his response was that other banks were doing it, and therefore so should we. If Shinhan had not sold these products, we could have differentiated our bank.

Does Shinhan’s new motto fit its image of being good at risk management and turning a high profit?

Businesses are organic entities. They should change in line with society. Shinhan has taken its time so far to grow steadily, but now it has matured and needs to act with a greater sense of social responsibility. Within one or two years, I’ll make sure this is the case.

What do you think of the controversy about high credit card transaction fees?

The rates should be determined by the virtue of cost analyses. If the rate is higher than the cost, it needs to be adjusted. From the outset, the rates should have been decided this way.

There are people who say that it does, but I am not a blind disciple of Ra’s. It is true that he recommended me for the job. But he knows me well. He knew that I would march to my own drumbeat and this has been the case.