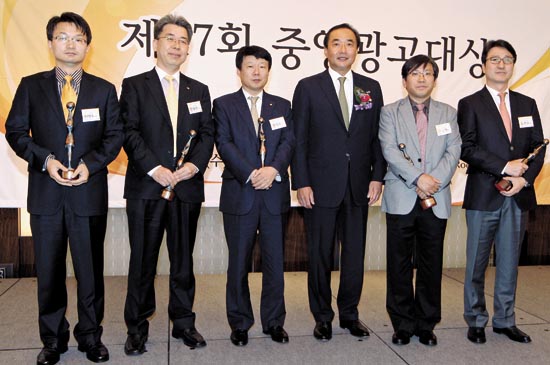 
The best newspaper advertisements of the past year were recognized yesterday at a ceremony marking the 47th JoongAng Advertising Awards at the Westin Chosun Hotel in Sogong-dong, central Seoul.

Over 100 leading and up-and-coming professionals in the world of print advertising, from agencies to their corporate clients, packed the seats to celebrate a string of the latest innovations in the traditional realm of newspaper ads.

Representatives of award recipients in the Korea JoongAng Daily category provided rare insight into how corporate messages, creative visions and the targeted English-language-newspaper readership combined to create some unforgettable works.

“Our message highlighted the idea of partnership by showcasing a brush and an inkstone - two writing utensils that cannot function without each other,” said Noh Chan-kyu of SK Holdings, which won the grand prize for its “Writing Greater Happiness with You” ad.

“This was geared towards foreign companies, which may be looking to enjoy a similarly harmonious partnership with us.”

The messages and targeted audiences differed according to each corporation.

“A financial company is built on customers’ trust,” said Han Dong-whan, general manager of the office of the board at KB Financial Group, which won the Best Communication award for its English-language advertisement highlighting outside recognition of its corporate governance.

“Because transparency is an important concern for local customers and foreign investors alike, we wanted to communicate a message concerning transparency, not only in Korean media but for foreign readers as well.”

An oft-repeated catchphrase at the ceremony was “fairness.”

“Since 2005, the judging criteria for the awards was retooled to put fairness above all else,” said Lee Myoung-chun, a professor of advertising and public relations at Chung-Ang University. Lee headed the panel of 10 judges.