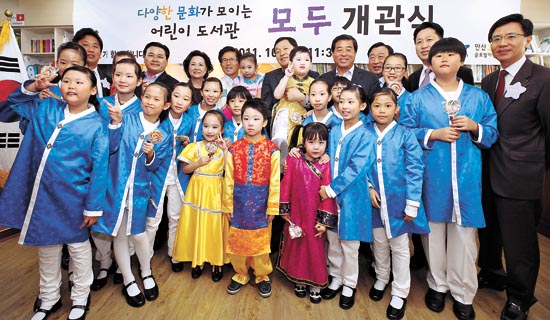 Lee Hee-bum (third from right on the back line) and related officials pose for a photo with children at the multicultural children’s library Modoo.


On the October 18, Lee Hee-bum, chairman of STX Heavy Industries and Construction; Lee Byung-ho, president of STX Energy; Choo Sung-yob, president of STX Corporation; Kim Moon-soo, governor of Gyeonggi; Kim Cheol-min, Ansan City mayor; and about 100 other people participated in the opening of Modoo, STX’s seventh multicultural children’s library, in Ansan. This multicultural children’s library is located in Wongok-dong’s special district with the name Modoo meaning a place where various cultures are gathered. It is a place where the children of multicultural families can access the culture of their home countries and meet other people in similar positions.

The Ansan branch of Modoo has about 10,000 books in 13 languages including Chinese, Indonesian, Tagalog and Vietnamese, which are difficult to find in other libraries.

There are 30,000 non-Koreans from 62 countries living in the district. It is the first place in Korea that has been designated as a special multicultural district and the library will be a meaningful addition to the community. STX Heavy Industries Chairman Lee Hee-bum said “We hope this multicultural children’s library will become a communication center for the local people as well as a base for the children.”