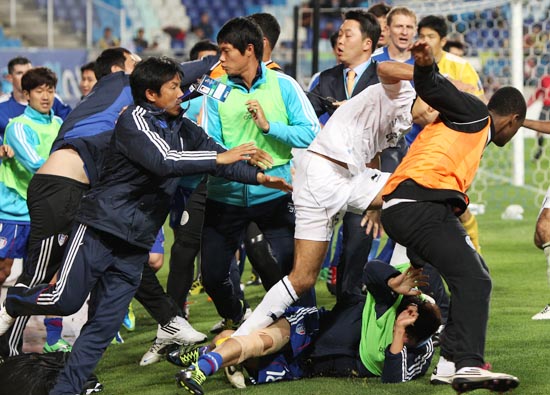 Players and coaching staff of the Suwon Samsung Bluewings and Al-Sadd grapple with each other during their AFC Champions League semifinal first leg at Suwon World Cup Stadium on Wednesday. [YONHAP]


The two remaining Korean football clubs in the AFC Champions League achieved mixed results in their respective semifinals this week, diminishing the chance of them meeting in the final.

Jeonbuk Hyundai Motors came from 2-1 down to win 3-2 in Saudi Arabia against Al Ittihad yesterday but the Suwon Samsung Bluewings, the other K-League representative in the competition, were beaten 2-0 by Al Sadd of Qatar at home on Wednesday.

At Prince Abdullah al-Faisal Stadium in Jeddah, Jeonbuk’s Cho Sung-hwan broke the 2-2 deadlock with 13 minutes left with a powerful header, giving his team a crucial away victory in the home-and-away semifinal.

Eninho and Son Seng-jun were the other goal scorers for Jeonbuk.

The second leg will be at Jeonju World Cup Stadium next Wednesday. Goals scored on away trips often play a part in determining which team goes through as they count double in the event of an aggregate tie meaning that even a 1-0 or 2-1 defeat at home will see Jeonbuk progress.

Choi Kang-hee, head coach for Jeonbuk, said the long trip to Saudi Arabia and the partisan crowd made the contest difficult for his team.

“I told my players that they had to force Al Ittihad defenders to make mistakes, especially in the penalty box, through fast play and constant pressure,” Choi said. “We successfully scored three times and this is a great thing. We still have 90 minutes to play, but things will be different on our turf before our fans.”

Suwon, however, wasn’t so successful against Al Sadd as Mamadou Niang scored both goals for his team in the second half.

Their next clash will also be next Wednesday at Sheik Jassim Bin Hamad Stadium in Doha.

Most of the talk about the Suwon-Al Sadd match will however not be about football.

Tensions were high and there were heated exchanges between players after Niang’s second goal with less than 10 minutes remaining. With Suwon’s Choi Sung-hwan on the ground with an apparent head injury, teammate Yeom Ki-hun put the ball out of play so his teammate could receive treatment.

With everyone standing around expecting the grounded Suwon player to be treated, a quick throw, which according to sporting tradition should have gone back to Suwon, and a pass caught Suwon off guard and gave Niang a one-on-one with Jung Sung-ryong, with the Senegalese international rounding the keeper and putting the ball into the empty net.

During the melee, a Suwon fan came onto the pitch to argue with the Qatari team’s goalkeeper, Mohamed Saqr Ahmed. Keita ran toward the fan from behind and slapped him in the back of the head before grabbing the fan by the throat.

“It was an ungentlemanly act on the opponent’s part to score in a situation when we should’ve gotten possession back,” Yoon said. “I think our players lost their cool even more when one of their players hit a fan.”

Jorge Fossati, coach for Al Sadd, acknowledged the second score was a contentious one.

“I don’t want to defend the second goal, but I think that Niang lost his head and made the decision to attack by himself,” Fossati said. “My players were feeling a little pressure emotionally as Suwon was continually attacking.”

Suwon will have to beat Al Sadd by at least three goals for an outright victory. A 2-0 win for Suwon will mean extra time before a potential penalty shootout.