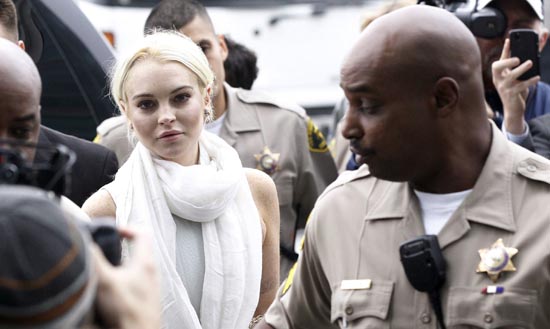 The actress was taken into custody after Superior Court Judge Stephanie Sautner revoked her probation because she was ousted from a community service assignment at a women’s shelter.

“There has been violation after violation,” Sautner said.

Bail was set at $100,000. Lohan’s spokesman Steve Honig said it was immediately posted and the actress was later released from Airport Courthouse.

“We’re dealing with someone on probation,” said Lohan’s attorney, Shawn Holley. “Most people on probation don’t always do things perfectly.”

A city prosecutor recommended jail time, but Sautner set a Nov. 2 hearing to decide whether Lohan should serve another stint behind bars, where she has been sent four previous times only to be released early due to jail overcrowding.

“If jail meant something in the state of California now, maybe I’d put her in jail,” Sautner said.

The development marked the latest legal problem for the 25-year-old Lohan, who was given probation for a 2007 drunken driving case and a misdemeanor theft case this year.

“Lindsay is hoping this matter will be resolved on Nov. 2 and the court will reinstate probation and allow her to continue fulfilling her community service,” Honig said.

Lohan had been ordered in April to serve 360 hours at the Downtown Women’s Center, an agency that helps homeless women. Nine of Lohan’s appointments at the center were “just blown off’’ and she “showed up once and left after an hour,” Sautner said.

Lohan has since started serving hours with the American Red Cross, but Sautner said that would not count because it was not part of her sentence.