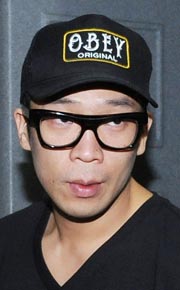 Prosecutors on Wednesday asked the Seoul Central District Court to sentence hip-hop singer MC Mong to two years in jail on charges that he evaded his mandatory military service by having 12 teeth pulled by dentists and deliberately deferred his enlistment six times.

The rapper, whose real name is Shin Dong-hyun, was in April given a six-month jail sentence, one year of probation and 120 hours of community service on charges that he deliberately delayed his military enlistment on false grounds. The initial ruling cleared him of the charge that he had his teeth pulled to be exempted from military duty. Prosecutors appealed the ruling later that month.

After Wednesday’s hearing, the rapper was quoted by local news sources as saying: “I used to be loved by many people and what I can say is that I feel sorry for the people who have supported me. I don’t even want to go back into entertainment. I just want to live like a human being. I feel like I’m already dead.”

Last October, MC Mong was accused of having 12 healthy teeth extracted by five dentists between 2004 and 2006 in order to dodge the draft. He was also charged with postponing his enlistment on various grounds including preparations for civil service exams.

The court will sentence the rapper on Nov. 16.