Hard-charging Taurus SHO lives up to its name

Hard-charging Taurus SHO lives up to its name 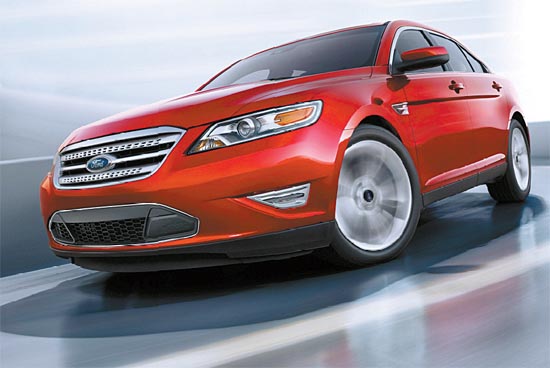 The Ford Taurus SHO, a sporty version of Ford’s flagship sedan, was launched in Korea for the first time this July. It is priced at 52.4 million won (46,100 dollars). Provided by the company


When I first saw Ford’s new Taurus SHO, I felt like I had to get behind the wheel and put its EcoBoost 3.5-liter V6 engine through its paces. Its modern, sleek design and grandeur quickly captured my attention, while the front metallic grill and slender headlights make this car quite a head-turner.

Ford launched the 2012 SHO, a sporty version of its flagship sedan that first went into production in the U.S. back in the 1990s, for the first time in Korea this July.

As the name suggests - SHO is short for super-high output - it is more powerful than other sedans with V6 engines sold in the country.

With a twin turbocharger and direct-injected engine, it delivers up to 370 horsepower (100 hp more than the Taurus SEL and Limited) and 350 lb-ft of torque. In fact, its V6 engine can generate as much power as a typical V8.

The SHO is priced at 52.4 million won ($46,167), making it more expensive than the SEL (38 million won) and Limited (44 million won) versions, which both share the same engine displacement.

Although the price may seem a little steep, for an import of this size no other foreign car in the country can match it in terms of financial economy.

One minor drawback is the vehicle’s fuel efficiency, which at 8.3 kilometers per liter (19.5 miles per gallon) is not great, but a tolerable sacrifice given its enormous horsepower.

When I took it out for a spin on a local highway, it took off in a flash despite weighing 2,020 kilograms (4,453 pounds). It also provided a smooth ride courtesy of its sports-tuned suspension system. 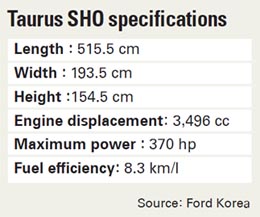 For ease of use by local consumers, the model offers Korean-language touch-screen navigation on a visual display system that combines entertainment and pathfinding, much of it in English. The navigation device feels more user friendly than typical jog dial controls with which European luxury cars usually come equipped.

Additionally, the car has a voice-activated entertainment system installed. However, when I tried it, I found it easier to control digitally as opposed to screaming at the dashboard.

The three versions of the 3.5-liter Taurus - the SHO, SEL and Limited - have all been well received in Korea, making the Taurus the 10th bestselling import in the month of September. A total of 1,242 of the three versions were sold this year, including 211 in September alone. Last year, the Taurus accounted for one-third of total sales of all U.S. imports here.

The Taurus is reminiscent of Ford’s old Mercury Sable, which was sold in Korea in the late 1990s. The U.S. import was one of the most popular foreign vehicles in the country. Its modern styling and spaciousness made it stand out from the crowd, but it was still affordable. And in this respect, the Taurus does a great job of filling its shoes.

But no one’s perfect, and the same holds true of automobiles. So despite its stylish and modern exterior, the interior still has considerable room for improvement. The plastic finish looks a little cheap, while the dashboard is somewhat bulky and unrefined. Although most U.S. cars have made progress in terms of style, for this little gem, there are still some final touches that need to be added.