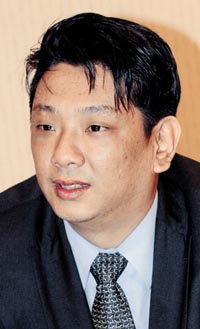 Brazilian treasury bonds have become popular among investors in well-to-do southern Seoul recently. More than 1 trillion won ($873 million) of the bonds have been sold in Korea so far this year.

Lee, an ethnic Korean, recently attended the 14th Future Leaders’ Conference in Seoul, a gathering of ethnic Korean business leaders from around the world.

Well-connected with Brazil’s financial community, Lee is also a professor of business administration at Fundacao Getulio Vargas, one of Latin America’s top three business schools, where he lectures twice a week.

Lee is one of three ethnic Koreans in Brazil who are licensed to run asset management companies there, he said. KLL manages $100 million in assets.

“Brazil has one of the highest interest rates in the world,” Lee said. “The bonds can be very attractive for Korean investors.”

“Besides that, Brazil’s economy will remain strong for a while. That’s why Korean financial companies, including Mirae Asset Securities, are entering the Brazilian market,” he said.

Despite the gloomy global economy, Lee projects a bright future for Brazil’s. The FIFA World Cup will be held there in 2014, followed by the Olympics in 2016 in Rio de Janeiro.

“To host such large international events in a row, Brazil will have to invest a lot,” he said. “Because of the investments, its economy will be less affected by a slowing global economy. The economy will continue to grow at least until 2014.”