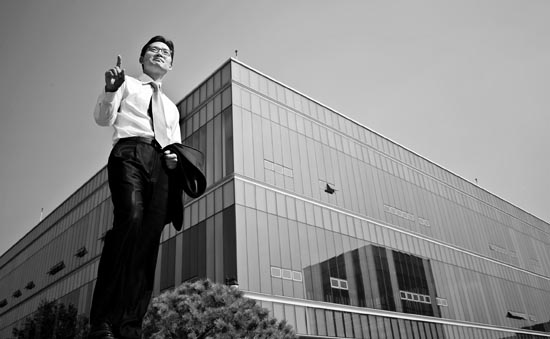 Interpark Ticket CEO Kim Yang-sun poses in front of Blue Square, a performing arts center where people can enjoy both musicals and concerts, in Hannam-dong, central Seoul. By Kwon Hyuk-jae


Interpark, the online ticket vendor, is not merely a reservation counter. With 70 percent of the market share, Interpark has become a magnate of the performing arts.

Now, Interpark is advancing into the concert hall business with the opening of Blue Square, a performing arts center, on Nov. 4.

Despite the high expectations, there are also concerns as the company enters a new business. The JoongAng Ilbo sat down with Kim Yang-sun, the 43-year-old CEO of Interpark Ticket.


Q. What type of place is the new performing arts center?

A. We’ve been pursuing the hall with the Seoul Metropolitan Government since 2005. After six years, it has finally come to fruition. The strength of our venue is that musicals and concerts can be enjoyed in one place.

The musical theater has 1,700 seats and the concert hall has 1,400 seats with 3,000 standing-room spots. In the case of concerts, we plan to focus on self-production with the hope of seeing improvement in the production environment. The fact that Blue Square is located on “Comme des Garcons” street in Itaewon, where we will be able to tune in with young artists, is another source of pride. I assure you that it will be the most public-friendly auditorium.

Most performing art centers lose money. Are you looking forward to making a profit?

We are actively pursuing naming rights, in which major companies buy the rights to name our auditorium. Profits can also be made through subsidiary facilities and joint production. Operating in the black within four years is our goal. The business has to be seen in the long run.

Until five to six years ago, Interpark was second in the industry. What was the key behind your rapid growth in such a short time?

We’ve been keeping stable partnerships with Korea’s leading production companies Mast Media and Seensee Company. We tried to make it convenient to buy tickets, such as discounts for early reservations and targeted marketing. We also provided a variety of interesting performance information. Establishing Interpark as a “performance playground” has proved to be effective.

Some say Interpark was able to dominate the market through cutthroat capitalism, demanding exclusive rights to productions in exchange for advance payment.

Most production companies are having difficulty these days. They have no money. That is why I lent it to them. We did not request anything. We’ve simply accepted the offer of our partners. The ticket business is a secondary business. The production companies, which are the primary, have to succeed for us to prosper as well. Advanced payment also had the purpose of lending a hand to production companies with poor financial situations.

What about the negative consequences of having 70 percent of the market share?

A monopoly is definitely dangerous. But we have to determine who is really harmed. The audience? Production companies? This is not the case. I see it as jealousy from our competitors. Korea’s performing arts industry today is worth 500 billion won per year. It has been stagnant for years. The reason we have expanded into the concert hall business is that good infrastructure is the basis of the performing arts industry. We aim to focus on increasing the volume of the market. We will invest for the future, not the present.