Come to Icheon for the rice of kings

Come to Icheon for the rice of kings 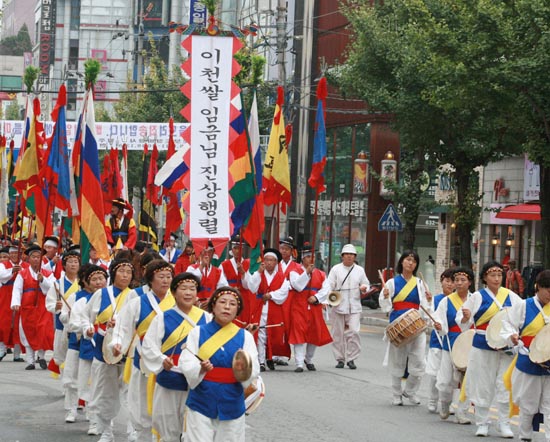 The 13th Icheon Rice Cultural Festival opens on Nov. 3 with a parade to recreate a crowd of people who would walk to Seoul from Icheon to deliver rice. Provided by Demos Tourism Communication & Consulting


It’s not just the leaves on the trees that change color in the fall. Rice that was green all summer now wears a golden coat, signaling the start of harvest season. Icheon, Gyeonggi, known as the region that once supplied rice to kings, is holding its annual rice festival again starting on Nov. 3 for a four-day run.

Icheon, only an hour away from Seoul, is known for its farm products, including rice grown on a vast flatland with high-quality soil. The rice produced there often made its way to the king’s dining table throughout Korean history.

To inform the younger generation about Icheon rice, the festival opens with a parade of people who used to deliver it from Icheon to Seoul. After the parade, to ensure the success of the festival, the organizer will hold a garaeddeok- (cylinder-shaped rice cake) making contest. Last year, the rice cake was about 600 meters (1,950 feet) long, and the organizers hope to break last year’s record. The cake will be cut later and served to visitors for free on opening day.

Visitors will not believe how tasty the rice is unless they try it. Throughout the festival period, the festival organizer cooks rice in a pot that is big enough for six people to comfortably sit and share it with the visitors. One bowl of rice costs 2,000 won ($1.74). 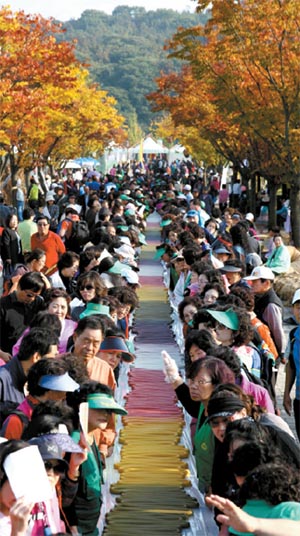 On Saturday and Sunday of festival weekend, the organizer tries to show how the local crop can be a medium to bring multicultural communities to the country. Considering that many Asian countries use rice in their dishes, the event called Rice Dish Competition aims to present a variety of rice dishes at the festival and in fact convince foreigners that their authentic dishes can taste good with the rice produced in Icheon.

The festival offers a chance to buy the rice at a cheaper price. Especially this year, due to the frequent heavy rains and the heat wave after the rainy season until late September, the supply of farm products decreased, which triggered a price hike. For a 10-kilogram (22-pound) bag, it is about 3,000 to 5,000 won cheaper than the normal supermarket price.

“Although the price difference might not seem so huge for the 10-kilogram bag, the larger bag you buy, the more you save,” said Yoo Saung-gyu of Icheon Agricultural Technology Service Center, the co-organizer of the festival, at a press conference early this month. “So it would be better to come down with a group of families or friends.”

*The 13th Icheon Rice Cultural Festival starts on Nov. 3 and runs through Nov. 6 in Seolbong Park in Icheon, Gyeonggi. To get to Icheon, go to Express Bus Terminal and get on a bus to Icheon Terminal. The trip will take roughly one hour. For more information, call (031) 644-4127 or go to www.ricefestival.or.kr.