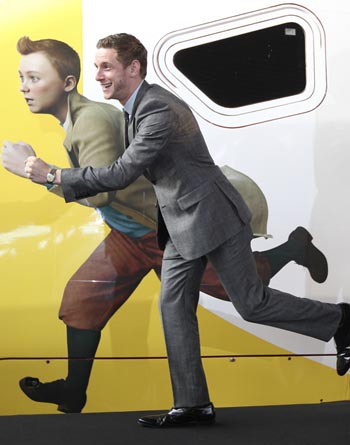 BRUSSELS - Tintin always is flawless, courageous and heroic - right up to the point of being cartoonesque. That left British actor Jamie Bell, 25, with the challenge of turning the character into a believable, flesh-and-bones intrepid reporter for Steven Spielberg’s “The Adventures of Tintin: Secret of the Unicorn.’’

Granted, Bell’s acting was enhanced by performance-capture technology, which layers computer animation onto actors to add a veneer of recognition as well as the atmosphere of the old comic books populated by villains and heroes.

Still, it was daunting. “For Tintin, his palette, the colors aren’t as rich,’’ Bell acknowledged in an interview with The Associated Press.

Tintin is a character dreamed up 80 years ago by Belgian artist Georges Remi, who wrote under the pen name of Herge. Now Tintin has to come alive on the screen in an age where 10-year-kids know all about irony, sarcasm and the fact that vice and virtue are often much more intertwined than adults let on.

Spielberg and Bell are trying to take these kids back in a time machine, to Europe deep in the 20th century, when things seemed simple and straightforward.

Bell says he loved playing “a great heroic character that is straight-laced, old-fashioned and doesn’t rely on anything but just natural instinct. I don’t think we see those kind of heroes anymore.’’

Bell was in Tintin’s home town of Brussels for Saturday’s world premiere of the movie, which will roll out across Europe and elsewhere before hitting the United States by the Christmas movie season.

“The Secret of the Unicorn’’ is a rollicking ride from one haphazard event - Tintin’s purchase of an old model ship - to dangerous fights on a rusty cargo ship to exotic desert adventures, all spiced with a dash of humor and chase scenes that have become a Spielberg hallmark.

Bell’s character is never far from Andy Serkis’ Captain Haddock, a cursing alcoholic prone to fits of self-pity and flourishes of bravado. In cartoon terms, it was casting Mickey Mouse alongside Donald Duck.

Was Bell ever jealous of Serkis’ right to wreak havoc?

“Yes, of course, but you cannot have one without the other. If we were both like that .?.?. it would turn into such slapstick,’’ he said.

Instead, the order of the universe is turned on its head as the boy reporter becomes the adult in this situation.

“Tintin is the parent and Haddock is the child,’’ said Bell. “It creates a fun dynamic.’’

Bell was an eight-year-old himself when he first came face-to-face with Tintin through the books and animated cartoons. Like most Europeans, he was immediately smitten.

At that age, “he is everything that you want to be. He literally takes you out of your bedroom,’’ Bell said.

It was a role 17 years in the making.

“When I found out when, A, they were making a film of Tintin, I was immediately excited. But, B, when I found out that they wanted me to play him, it was ridiculous,’’ Bell said.’’