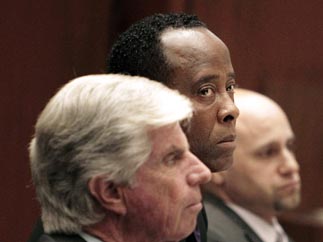 LOS ANGELES - The lead attorney for the doctor charged in Michael Jackson’s death challenged a key prosecution expert Friday about his contention that the physician was responsible for the death of the singer.

Attorney Ed Chernoff cross-examined Dr. Steven Shafer, who previously testified that the only plausible explanation for the death was that Jackson had been hooked up to an IV drip of the anesthetic propofol then left alone by Dr. Conrad Murray.

Chernoff also questioned the Columbia University researcher and professor about his IV demonstration for jurors on Thursday.

The defense attorney suggested Shafer had drawn conclusions that weren’t necessarily supported by the evidence. Chernoff said the type of IV line that Shafer used in the demonstration was never found at Jackson’s house.

Murray has pleaded not guilty to involuntary manslaughter. He could face up to four years behind bars and the loss of his medical license if convicted.

Shafer was expected to be the last witness called by the prosecution. After Shafer’s testimony ends, defense attorneys will begin presenting their case.