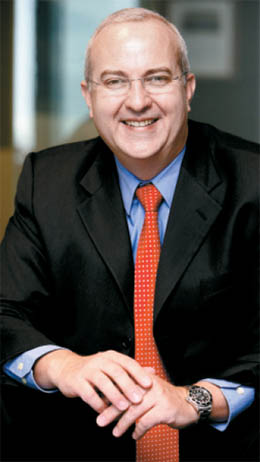 As part of its strategy to strengthen its small car lineup, Mercedes-Benz Korea said it plans to introduce the new B-Class in Korea next year, Harald Behrend, the company’s chief executive officer, said in a recent interview with the Korea JoongAng Daily.

Mercedes-Benz Korea, the second most popular foreign brand in Korea in terms of units sold, had record sales this year and surpassed 1 trillion won ($869.6 million) in annual sales for the first time last year.

The biggest challenge Behrend has had in the last four years was low acceptance of the purchase of luxury imports, Behrend said. In the past, Korean businessmen were afraid of driving pricey foreign vehicles in case it gave them a bad image, he said.

Times changed and luxury imports are more socially accepted. “It is on right track,” he said.

Behrend hopes Korea’s free trade agreements with Europe and the United States would contribute to even bigger acceptance for foreign vehicles.

Behrend also said that while he was in Korea, he came to like Korean food, especially kimchi. He enjoys it so much that he recommends it to his friends and relatives in Germany. He once carried 15 kilograms (33 pounds) of kimchi to Germany to give as gifts. “That was a challenge,” he said.


Q. Please tell us about MBK’s performance this year. What are MBK’s plans for the rest of the year? 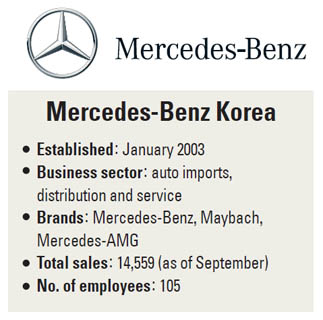 A. We are having another very successful year. Our sales have been growing consistently since 2003. We sold around 14,559 cars this year through September, and that’s an increase of 21.7 percent from a year earlier. We are quite happy.

What was your biggest challenge while you were in Korea in the last four years?

The biggest problem for the imported-car industry is low acceptance. Some years ago, local businessmen didn’t dare to drive expensive imports because they were afraid that would have a negative impact on their businesses.

This is gone nowadays. You can either drive a Korean car or a foreign car. I think nowadays imports are well accepted and are not considered a threat to the Korean economy. Now, driving a foreign luxury car is socially accepted. I believe it is on the right track.

In fact, we are supporting the economic development in Korea by creating a lot of jobs within our industry, including parts suppliers and dealerships.

With global enterprises like Hyundai, LG and Samsung, you cannot only export. You also need to import.

Openness in the market will grow after Korea signed free trade agreements with Europe and the United States.

Have you noticed any changes in sales since the Korea-EU FTA took effect in July?

Showroom traffic in dealerships increased, and we expect a positive push in the mid to long-term as tariffs will be reduced step by step in the next few years. Cars will become more affordable. There is no change in strategy yet. The FTA has some psychological effect. It has increased acceptance of import cars in Korea. With the growing presence of local automakers like Hyundai and Kia, Korea itself is becoming a global player in the market.

The portion of small-car sales in the country’s imported-car market is growing rapidly. Does MBK plan to launch more compact models in Korea?

The new B-Class had its world premier in September at the Frankfurt Motor Show. It is the smallest in our lineup. We’ll introduce the new B-Class next year in Korea.

Is there a reason why you haven’t launched the A-Class in Korea?

Currently, as you already know, we will develop more compact cars. Next to be introduced to the market is the A-Class. We’ll definitely introduce additional compact cars to the Korean market as soon as they are launched by headquarters.

We started off in Korea mainly with the high-end premium segment, such as the S-Class to E-Class, and then expanded our range to smaller models. Now we have the C-Class, which is extremely successful. More than 1,500 units in the C-Class were sold. Young people especially like our smaller models.

We will start with the B-Class and then A-Class. Of course, we will wait for new models to be launched.

We already have 38 Korean suppliers who provide components to our worldwide production network.

Here, we have a procurement office in our unit. They do nothing but look for new suppliers in the Korean market and manage existing suppliers.

Korea is a very important base for parts supply because of the success of the local auto industry and the improving quality of Korean cars.

Due to high fuel costs, there is much interest in energy-efficient models. Do you plan to offer more diesel or hybrid cars in Korea?

When we look at Daimler in general, it is one of the few automakers in the world that currently invests in all green technologies.

Diesel, hybrids, plug-in hybrids, fuel cell and gas, you name it. We’re investing enormous amount of money in research in all the different technologies.

We have diesel vehicles in all our model ranges. For the S-Class, we also offer a hybrid version.

The country’s imported-car market is growing at rapid speed. With such growth, do you have any problems with after-sales service?

We have put a lot of effort in developing service centers within the last four years. The number of such centers increased to 26 this year from 18 last year. Planning for next year, we’ll have 32 by the end of next year.

Why did you start a social-contribution program with Korea National University of Arts?

Several weeks ago, we launched the program with KNUA. On one hand, we support traditional arts and culture, and on the other, we support three new Korean artists from various disciplines.

As a global brand, we engage in humanitarian, social and cultural programs worldwide.

I think it is very important that we support people from different areas and fields of art. We’ll help promote Korean culture nationwide and hopefully worldwide as well.

We also give special support to traditional Korean art because, in the modern world, it is difficult to preserve a country’s own heritage and culture.

While you were here, did you come to like Korean culture and food?

I am not a fan of heavy drinking, but I love Korean food and cuisine very much. I am a big fan of not only Korean barbecue but other traditional foods such as dakgalbi.

I also belong to the group of foreigners who love kimchi. I can even distinguish good kimchi from bad kimchi.

Ugly apples and potato pastries as farmers get a helping hand