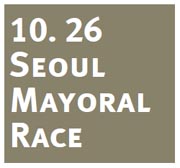 How would Seoul change if led by either of the two candidates running for mayor, Na Kyung-won and Park Won-soon?

Under the sponsorship of the Seoul Metropolitan Election Commission, the JoongAng Ilbo and the Korean Association for Policy Studies conducted a joint analysis of the two candidates’ campaign pledges based on their answers to questions that were drafted by 40 scholars who are members of the association.

Both candidates said their top economic priority would be creating jobs and promoting self-employment. Their other pledges to develop Seoul’s economy, however, differ significantly.

Neither candidate emphasized real estate policies or attracting foreign investment. They also did not pay much attention to developing new growth engines for the future.

The Korean Association for Policy Studies said an analysis of the two candidates’ priorities showed that Na was leaning to the left, while Park was leaning to the right, in an apparent attempt to appeal to each other’s supporters.

Na and Park also showed a clear difference on their specific plans to boost employment.

While Na put an emphasis on creating jobs for the socially vulnerable, such as women, the youth, the disabled and the elderly, Park had a narrower focus on youth employment.

Na promised to spend 1 trillion won ($872 million) to create a massive complex that would be home to young entrepreneurs, but didn’t say how she would finance the project. Park, meanwhile, pledged to support the creation of 10,000 start-up companies by young entrepreneurs, and also didn’t describe how he would pay for the plan.

In terms of urban planning, Na and Park had very different priorities.

Park said his first project would be to try to tame the steep rise in jeonse, or rental deposit payments. Park said he would earmark 3 trillion won from the budget for the remaining three-year term of the mayor by reforming the city’s finances and shutting down some projects of the previous mayor, Oh Se-hoon, and build an additional 20,000 housing units by 2014. Park pledged to terminate many of Oh’s projects, including the Han River Renaissance project.

Na’s top priority in urban planning was narrowing the wealth gap between the areas south and north of the Han River. Na proposed to spend 100 billion won annually to build community support centers and improve infrastructure.

The Seoul mayoral by-election was prompted by Oh’s unexpected resignation after his defeat in a referendum on whether the city should provide free school lunches to all students.

Both Na and Park said divided public opinion over the lunch program was the topic they saw as the top priority in conflict management.

The mayoral hopefuls presented contrasting plans on how to mend the rupture. Na said she would talk with the Democratic Party-controlled Seoul Metropolitan Council to narrow the difference in views over the lunch program, stressing that the city council must keep in mind the fiscal realities of the city. Park, in contrast, said he would firmly support the current free school lunch program.

Asked by the association to state their top 10 welfare priorities, Na said hers would be increasing public child care facilities, expanding public education infrastructure and providing more support to the disabled.

Park said his top priority was expanding the free school lunch program. That, however, was the 10th priority on Na’s list.

“Both candidates’ pledges are to expand welfare benefits, rather than scrapping current programs,” the association said in its analysis. “And yet, Na is promising more specific programs for particular groups in need, while Park’s pledges are more general and broader.”

Both candidates said that improving education in the city was a crucial issue. Their top three education priorities were the same, although the order was a little different.

Na said her top education priority was improving public education to prevent parents from having to send their kids to hagwon, or after-school cram schools. Her next pledges were eradicating violence in schools and expanding after-school child care services for elementary and middle school students.