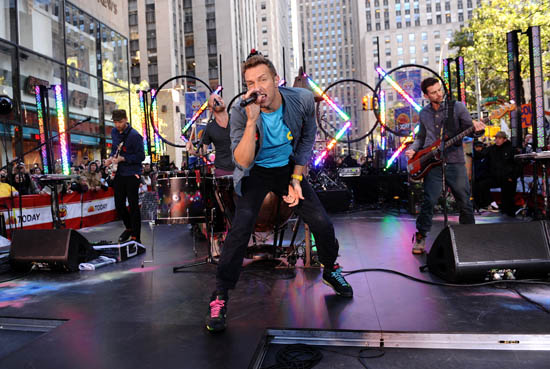 In this image released by NBC, singer Chris Martin of the music group Coldplay performs with his bandmates on the “Today” show on Friday in New York. [AP/YONHAP]

You may not understand the title of Coldplay’s new album let alone be able to pronounce it, but “Mylo Xyloto” is a name music fans may have to get used to as the group launches a fresh assault on the world’s charts.

The English quartet’s fifth studio album hit shelves in Britain yesterday and will be released today in the United States, and early critical response is mostly positive for a record aided and “enoxified” by Brian Eno.

Judging by comments made during a blitz of interviews to publicize the album, Coldplay could do with a little love, something that might seem strange given their success.

Their last record, “Viva La Vida or Death and All His Friends,” was released in 2008 and went on to become that calendar year’s top-selling album at 6.8 million copies.

They are one of the world’s biggest bands, have multiple Grammys and album sales of around 50 million to their name.

Yet that has not shielded the unusually unassuming rock stars from criticism that tends to focus on their clean-cut “middle class” image and music that naysayers label as “bland” and “Radiohead-lite.”

Guitarist Joe Satriani also sued the band, alleging that their chart-topping and award-winning “Viva La Vida” contained elements of his “If I Could Fly.” The two sides reportedly settled out of court in late 2009.

“We got to a very low place on the last record where we felt not very popular,” lead singer Chris Martin told The Sun tabloid.

“But it was refreshing as it made us start from scratch. A clean slate. So many people had made up their minds about us already that we had nothing to lose.”

That sense of defiance came with a realization that, in order to rule the charts again, Coldplay is not up against “stadium bands” like U2, but teen sensation Justin Bieber and English singing sensation Adele.

“Now we have Justin Bieber and Adele to compete with and they’re a lot younger,” 34-year-old Martin, who is married to Hollywood actress Gwyneth Paltrow, said in a recent interview.

“We have to have the energy to put as much effort into our work as they do. If it’s over, it’s over and I can live with that. The most important thing always is to proceed as if every album is the last and not expect anything more.”

Early reviews of “Mylo Xyloto” have been generally positive, with critics remarking that, while offering some fresh twists, the sound is essentially the Coldplay of old.

He went on to call the album “irresistible,” but voiced reservations, shared by Alexis Petridis of The Guardian in a three-star review, about the lack of depth in lyrics and music.

“Questioned about the title, Martin has insisted ‘it doesn’t have any meaning,’” said McCormick. “His defiant inarticulacy feeds the notion that Coldplay is a pop group in rock clothing.”

Martin, along with bandmates Jonny Buckland (guitar), Guy Berryman (bass) and Will Champion (drums), have produced a concept album loosely based on a love story set in a dystopian world.

In June, Coldplay released its first single “Every Teardrop is a Waterfall” followed by “Paradise” in September.

Among the highlights of the 14-track album are “Princess of China,” featuring Rihanna on vocals.