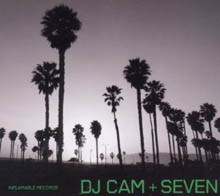 There’s something dour about DJ Cam’s new album “Seven,” with its slow and brooding fusion of hip-hop and jazz. The French mix master has an interesting approach to blending disparate sounds, but seldom do things develop into a full gallop here, leaving the effort feeling a bit unfinished.

DJ Cam likes trickles of piano, streams of ethereal synth work and a walking pace to his work. The beats are simple and often border on Casio keyboard territory, as is evident on “Dreamcatcher,” with its old-school computer hand claps. But the further you get into that track, less is revealed.

This is the routine on other songs as well, like the title track “Seven” and “Fontainebleau.” The sounds and mixing is fine, but there is no great unveiling of purpose to the songs. The beginning sounds like the middle which sounds like the end. There is little plot to DJ Cam’s purpose.