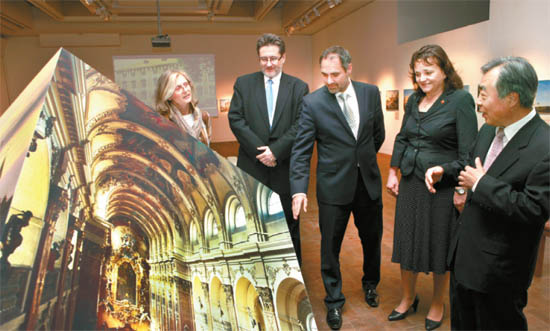 
Between Oct. 20 and 23, the Embassy of the Czech Republic, supported by the Seoul Metropolitan Government and the City of Prague, organized its biggest cultural presentation in 21 years of diplomatic relations with South Korea, showcasing artistic works representative of Prague in Seoul.

The “Month of Czech Culture in Seoul” was launched at the beginning of October and will have more than 20 events including theatre, art, music and dance, the highlight of which was “Prague Days in Seoul,” a response to “Days of Seoul in Prague,” which took place in Sept. 2009.

While cultural interest is the main medium of exchange, the science-fiction writer-turned ambassador stated, “I was amazed to find that the trade between the Czech Republic and Korea is $2.3 billion.” He cites that Czechs export many things ranging from beer to crystals and that Czechs are also carmakers, like Korea.

Thursday night kicked off with two performances at the Sejong Arts Center: the Image Black Light Theatre performance and Chansons and Songs by actress Zora Jandova and composer Zdenek Merta. “Black theatre” was developed by Czech artists in the 1960s and combines modern dance, mime and nonverbal theatre. There were some diplomats and foreign faces, but the majority of the audience was Koreans, the ambassador stated.

Two supplementary exhibitions were launched for the event: “The Best of Prague Graphic Arts,” held at Jeong Dong Gallery, and a photography exhibit, “Prague Panoramic,” held at the Seoul Museum of History.

Friday saw the signing of a memorandum of understanding between the directors of the City of Prague Museum and the Seoul Museum of History, witnessed by the ambassador of the Czech Republic, Jaroslav Osla and Jan Kalousek, chairman of the Prague City Assembly Committee for Foreign Relations and Tourism.

“The exhibition is a nice presentation but only a very small portion of what you can see in Prague,” stated Kalousek, a rock-star-turned politician who still sings and composes.

The exhibition presented a panoramic view of the city of Prague which has just 1.2 million inhabitants, compared to over ten million in Seoul. The earliest view of the city is from a woodcut city dating back to 1493 and similar prints and woodcuts of Prague were displayed through the 19th century. Modern-day Prague is captured by photographer Jan Vrabec. A digitalized 3-D rendition of Langweil’s “Model of Prague,” built from cardboard from 1826-1837 adds a unique element to the exhibition.

It was Kalousek’s first visit to Seoul, and while he was only able to spend three days here, he was able to appreciate the city thoroughly. “I especially enjoyed the model of Seoul [in the museum] because I went to Seoul Tower yesterday and had a view of the whole city.”

“We share similar historical experiences,” said Kalousek, regarding Korea and the Czech Republic. “We both have experienced being occupied and were both destroyed after World War II and had to rebuild the country.”

“I see the relationship between Korea and the Czech Republic as on-going,” stated Kalousek, hoping for continued economic and cultural exchange between the two countries.

Though the Czech ambassador is unsure that such a big event can be held annually, “I definitely think we will have more frequent smaller events including four contemporary art exhibitions next year.”

The “Prague Panoramic” exhibition will be held through Nov. 19 at the Seoul Museum of History, from 9 a.m. to 7 p.m.