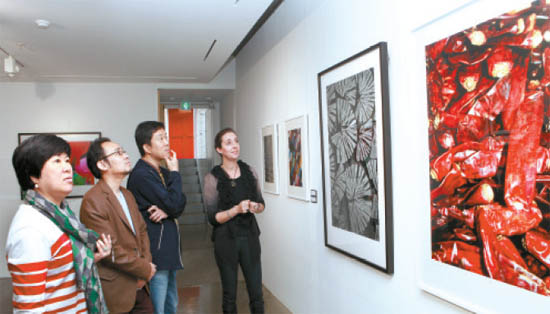 Dutch photographer Esther Thelen (right) and visitors to the SIWA photography exhibition look at some of the work on display. By Park Sang-moon


A photography exhibition in a contemporary art gallery in Jongno, central Seoul, showcases the work of eight women of different nationalities and occupations.

The thread tying them together is that they are members of the Seoul International Women’s association (SIWA), a volunteer networking group for expats residing in Korea.

“Stories - By international emerging artists” which features photographs from students of Korean fine arts photographer Mihe Shin, also a member of SIWA, is currently on exhibit at Namu Gallery as a prelude to the association’s 50th Anniversary Year Celebration.

“Basically, it’s about all of our stories,” said Esther Thelen, a Dutch Web designer and photographer who has resided in Korea for the past three years with her family. Seven of her photographs, some of them taken in Korea and some in the Netherlands, are on exhibit.

Other photographers are Joke Verheersch from Belgium, Julita Wick from Indonesia, French-Belgian Berenice van der Elst, Caroline Maryan and Lorrie Gomes from the United States and Ann Tae-Rang from Korea.

From the serene orange landscape of “Water Hole Sunset” in the Cederberg Mountains, South Africa, to the crimson “O-Torii Gate,” jutting from the deep blue ocean in Miyajima, Japan, to a lone white lighthouse in misty Chesapeake Bay, Maryland, walking through the exhibition is like embarking on a world tour, catching glimpses of India, Nepal, Turkey and Korea captured by these discerning female photographers.

Gomes’ “Wishing Pond” depicts rusty coins strewn in a mossy green pool, a scene which could be anywhere until you realize the currency is yen. Others put familiar scenery in a new perspective like Wick’s photograph of the Admiral Yi Sun Sin monument illuminated by red and blue lights or Gomes’ “Buddha and Lanterns,” snapped during Buddha’s Birthday in Seoul last year. Several of Shin’s works are on display as well, on the theme of “Still Lifes and Seascapes,” photographed in San Francisco from 2003-2006.

The occupations of the women are as varied as the countries they come from, ranging from professional photographer to midwife and even a psychologist.

Once a week from February to July, the group of 11 women shared their photographs and offered constructive criticism in a course facilitated by Shin.

In the beginning, people were shy but as they grew more comfortable sharing their art, they discussed color, perspective and composition. Less focus was put on the actual technique.

“She is our guru,” Thelen said of Shin. This was the second year Thelen took Shin’s class.

SIWA is a means to establish a working women’s network and despite cultural differences, Thelen said she was able to share thoughts with women from all over the world. “I enjoyed the courses [SIWA] offered,” she said. SIWA offers women from over 80 countries courses in new skills and activities such as cooking, handicrafts and cultural lessons.

As a translator-turned Web designer, Thelen has an eye for design and enjoys repetition of patterns, which is captured in her photography. “White Lanterns,” taken at Seoul’s Jogye Temple last year, captures a myriad of white lanterns for the deceased against a vivid blue sky. Thelen expressed her doubts about exhibiting that photo.

“I wasn’t sure how Koreans would respond because of the sensitivity of the subject matter,” she said. However, the photograph has received good feedback. “Colorful Waste Doors,” taken in 2010 in Daehango, depicting rows and rows of doors, is being used as the promotional image for the exhibition.

Verheersch spent five years in India and, being in her 20s, is the youngest in the group. Working on projects in India as a midwife, Verheersch was able to capture meaningful portraits of people she met and worked with such as “Jamunabai,” an elderly woman from a small Indian village who worked as a village health worker.

“We didn’t know what Koreans and foreigners would both like,” Thelen said.

There is also a slideshow of 246 photos from the artists called “Asian Collage.” The Namu Gallery has a special architectural design, unique in Korea, with a system that projects photographs onto the glass wall of one side of the building so passersby get glimpses of the artwork, a system designed by the owner of the building, Choi Eun-joo.

In 2012, SIWA will celebrate its 50th anniversary as a place where women from all over the world can gather and share knowledge, culture and interest, as well as cultivating friends in a foreign country. SIWA is a volunteer organization and members come from over 80 countries.