Swedish ambassador has insights into North

Swedish ambassador has insights into North 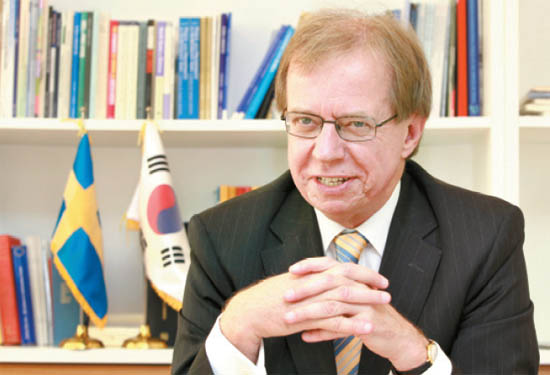 
Among the many embassies in Korea, the Swedish Embassy is one of the few that has contact with North Korea on a regular basis as one of the world’s few neutral representatives.

The newly-minted Swedish ambassador to Korea, Lars Danielsson, who visited North Korea on a number of occasions before his appointment, said the trips helped him gain knowledge about the two Koreas and understand the complex politics in East Asia.

“I’ve been to Pyongyang eight or nine times between 1991 and 2001, when I was working for the prime minister’s office,” the ambassador said.

Danielsson even met North Korean leader Kim Jong-il in May 2001 when Hans Goran Persson, then Swedish Prime Minister, visited both Koreas during friendlier times under the Sunshine Policy. At the time Danielsson was serving as state secretary for the minister.

“I had a privilege of seeing the North Korean leader with my own eyes,” Danielsson said.

The 58-year-old ambassador began his diplomatic career in 1981 when he was named first secretary at the Swedish Embassy in Beijing. Fluent in English and Chinese, he has been deeply involved in international issues, taking high-ranking positions at the prime minister’s office, the Swedish Mission to the United Nations and the ministry for foreign affairs. He also chaired the Swedish Defence Commission from 1997 to 2000.

“With my prime minister, I was privileged to sit in on a five-hour conversation with Kim Jong-il, to hear him argue and talk,” Danielsson said. “He argued very convincingly, with a very strange set of principles, such as the argument that the main goal of the United States is to annihilate North Korea.”

“I now sense the very strange way of his reasoning,” he added. “We could understand what we argued, but that doesn’t mean that we shared how we think.”

Sweden established its embassy in North Korea in 1975, making it one of 15 countries with diplomatic missions in the country. Sweden is also one of the four nations that joined the Neutral Nations Supervisory Commission in 1953.

Sweden has been able to maintain relations with the regime through its aid. Recently, the Swedish government said it would give $2.94 million worth of medical aid to North Korea, according to Voice of America.

“We have a very strong humanitarian tradition, which is that on a humanitarian basis, you have to help people regardless of their character and regime,” Danielsson said. “But we don’t give the aid directly to North Korea, but through the European Union and world programs.”

Asked if there’s any economic relationship between North Korea and Sweden, the ambassador said that bilateral trade between the two has been stopped for a long time because North Korea failed to pay off its debts.

“I would say that, basically, official trade between the two governments is nonexistent now,” the ambassador said. “When I worked at the Swedish Embassy in Beijing, my main task was, once a week, to remind the North Korean government that they had a large amount of debt to Sweden.”

“They haven’t paid for a number of things that we sold them in the 1970s, about $500 million, so now the sum is much larger, considering interest,” he said.

The new ambassador expressed his hope to visit North Korea again if possible.

“I hope to go there on a regular basis because we have an embassy in North Korea,” he said. “I think it is important as ambassador to tell South Korea about the North because an important part of our job is to understand what happens in the North.”