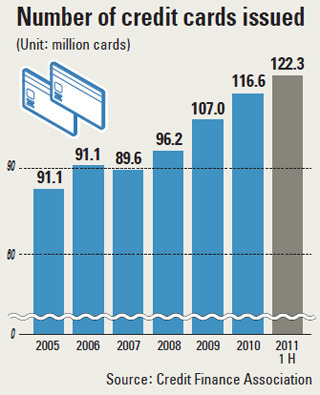 The number of credit cards in Korea rose nearly 5 percent in the first half of this year, meaning that the economically active population now holds an average of almost five cards per person.

A total of 122.3 million cards were issued as of the end of June, compared with 116.6 million at the end of last year, according to the Credit Finance Association yesterday.

This new record stands equivalent to 4.9 times the number of Korea’s economically active population of 25.45 million people, or those aged 15 years or older who are employed or actively seeking jobs.

This means that economically active people in this range hold 4.9 cards on average, or 0.2 more than the end of last year. The data forecast that this number would rise past five by the end of the year.

The number of credit cards issued in Korea rose until 2003, when the bubble burst following excessive reliance on this form of credit.

Since then, their numbers have picked back up despite the global financial turmoil, climbing to 96.2 million in 2008 and 107 million in 2009.

Market watchers said credit card spending jumped as competition among card issuers became more intense this year due to a move by KB Financial Group to spin-off its card unit.

However, credit card companies claim the trend is no cause for alarm and does not suggest an imminent repeat of the credit card crisis that erupted in 2003.

They say that currently, citizens’ cards have multiplied in response to a growing variety of products on the market, especially those with services geared toward certain payment habits such as discounts for gas prices or mobile payments.

“At the time of the credit card crisis, the problem was that people were tending to use one credit card to pay off another,” said an official at one of the nation’s card companies.

“Now the regulations have changed to make this practice more difficult, so customers tend to hold several cards [but for different reasons] to gain access to different services.”